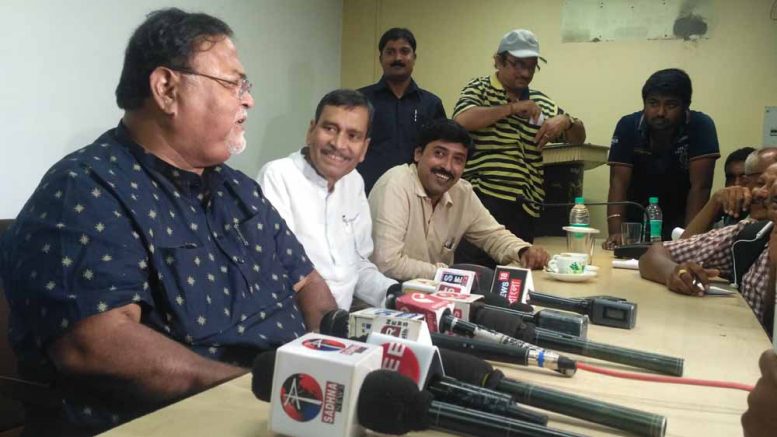 Kalyani, Sept. 15: Education minister Partha Chatterjee on Saturday apparently resolved the impasse at the Bidhan Chandra Krishi Viswavidyalaya (BCKV) campus and categorically condemned the hostel evacuation notice issued by vice chancellor Professor Dharanidhar Patra terming it as ‘inhuman act’. In an attempt to restore normalcy at the campus the minister advised Registrar of the University Professor Jayanta Saha to reconnect power supply and water as well as to arrange food for the students simultaneously asking them to return to the hostel by Saturday evening itself.

The education minister on Saturday rushed to Kalyani to pave out a way to clear deadlock situation at the BCKV campus that turned serious following an attack by miscreants on agitating students on September 12 night. Around one hundred miscreants armed with pistol, bombs, iron rods, chains attacked the students who were in a sit in demonstration demanding removal of two deans for their alleged partisan roles in dealing students. The miscreants had also entered ladies hostels and molested the girls there.

Chatterjee today had given a patient hearing to the grievances and allegations of the students and advised registrar Professor Jayanta Saha to take immediate necessary arrangements to constitute an inquiry committee through the university’s Executive Council to conduct an independent probe preferably by a ‘third party’ into the allegations of the students. He at the same time announced that no “outsider’ should enter campus without approval and told the University authorities to install more CCTV cameras to ensure security at the campus.

“This is inhuman act…disconnecting power supply, water supply and denying food cannot be a human act….The state government does not support it” – Partha Chatterjee

He advised the Registrar to make arrangements to convene executive council meeting as early as possible. He assured the students that the state government nominated representative to the EC would support the issues raised by the students for a probe.

The minister talked to the student for over an hour. However, Vice Chancellor Dharanidhar Patra was not present at the meeting. Sources said, he is ill and under medical care at an undisclosed place.

He also advised the students to return to hostel, which they were forced to evacuate earlier on the day. “The country will be the ultimate looser due suspension of classes and research work”, Chatterjee told the students. Administrative building of BCKV in Mohanpur

Speaking on the issue, he said, “I have told the students to return to hostels and call back their mates back too. I have also told the Registrar to arrange for food and restore basic amenities to the students immediately at the hostel and take whatever steps are necessary to restore normalcy at the BCKV campus as early as possible”.

Earlier on the day students evacuated the hostel after officials disconnected power apply, stopped and closed the kitchens. The students were also allegedly denied food outside by local food stall owners being instructed by Trinamul led miscreants.

A student said, “The food stall owners helplessly denied to sale even a cup of tea as they were threatened for dire consequences if they sale food to us. So we had no option to leave hostel”. The TMCP activists were seen roaming on the road keeping close watch on the food stall owners.

A section of agitating students later with their baggage arrived in Kalyani to meet the education minister. But, they were not happy with the minister’s announcement.

After the meeting, the students, however, did not hide their displeasure. “Nothing fruitful came out eventually. The minister came apparently to control the damage his party affiliated hooligans have done. Nothing has been told about the specific FIR naming the TMCP leader who attacked us and ransacked the BCKV campus. We now apprehend role of the government behind the evacuation notice. Even though the minister wanted to tell us a different story and apparently condemned the issuance of evacuation order. The situation at this moment compelled us to discontinue agitation. However, we will take our decision once all the students return from home as they left campus after the hostel vacation notice was served and all basic amenities were discontinued”, said a student of fourth year.

Subhas Koley, a member of Teachers aid, “It is quite unfortunate that all the teachers’ organizations were not invited to attend the meeting. Only a section of teachers having allegiance with the ruling party was present at the meeting. However, we welcome the proposals made by the minister if it at all truly executed. However, we have many doubts about the ultimate outcome”.