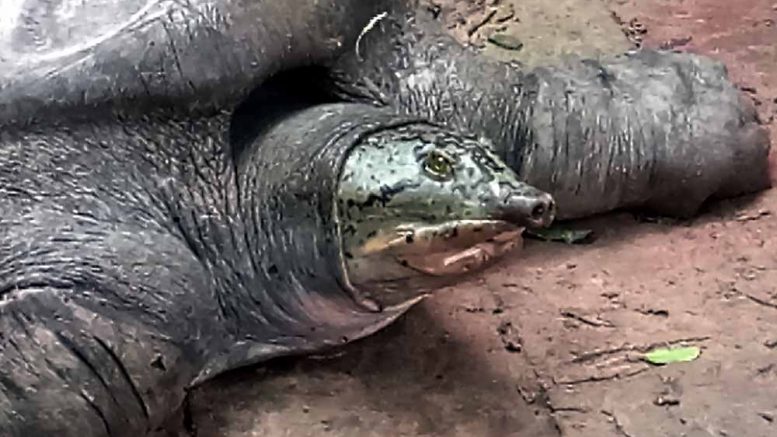 The tortoise which was trapped in fishing net in Tehatta

This gangetic tortoise, weighs over 30kg, a type of nile-soft shell tortoise was trapped in the fishing of Saiful Mondal on Saturday afternoon while he was fishing in his boat on the river Jalangi in Gopinathpur area of Tehatta in Nadia. Saiful, a resident of Nawda of Murshidabad sought help of villagers apprehending a ‘big’ catch anchoring his boat to the bank. But, all were surprised to find big tortoise inside the net after it was dragged out of water. The tortoise was first brought to Balaram Biswas’s home in Gopinathpur village. The animal bitten one of the curious villagers there, injuring one of his finger on left hand. He was admitted to hospital. Later villagers called Tehatta police. The police in turn called the forest officials. A team of forest officials from Tehatta range on Sunday brought the tortoise to Bethuadahari sanctuary and released it in the tortoise pond there. Divisional forest officer (Nadia-Murshidabad) Rana Dutta said: “This is a gangetic tortoise, which live in fresh water. It was somehow trapped in the fishing net. We have examined it and then released to the tortoise pond inside our sanctuary. The tortoise is visibly old one with a lenght over over three ft. But, its age could not be instantly ascertained”. However, Forest officials attached to Tehatta range claimed its age over 20years.