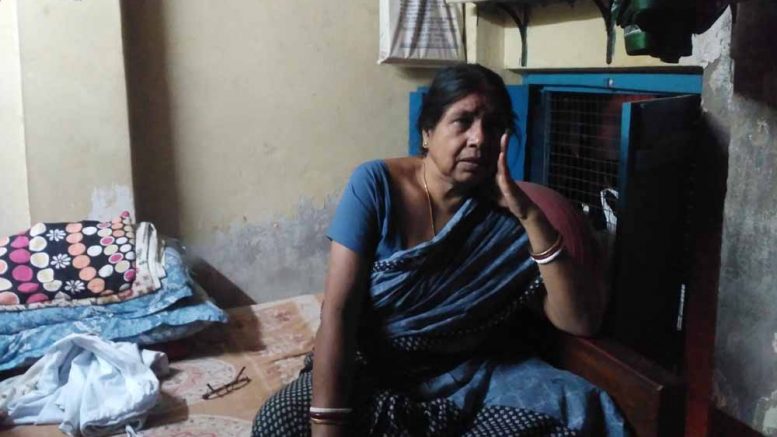 Cricketer Jhulan Goswami's mother Jharna Goswami in a sombre mood after the defeat of India to England in Lords. NfN Picture

Chakdaha, July 23: The ghosts of 2005’s ICC world cup final chased Mithali Raj and her girls in Lords that led India to succumb to England in the 2017 edition of the Women’s world cup cricket final match that played today. The Indian girls experienced the terrible feeling of defeat once again, an encore of sort of 2005’s final, after a gap of 12 years as they lost to England by 9 runs with 8 balls to spare in a nail biting match chasing a total of 228 in 50overs. The spectacular show of Mithali Raj and her girls that ignited hope for the cup for the first time came to an end crushing the expectations of the countrymen.

In 2005 final match that was played at Centurion in South Africa, team India lost to Australia in a similar fashion by 98 runs. India was all out at 117 chasing Australia’s 215. In both the occasions the unlucky captain was Mithali Raj. Jhulan Goswami of Chakdaha was also her team mate on that occasion, who was the second highest scorer with 18 runs.

For parents of Jhulan Goswami, her siblings and the residents of Lalpur in Chakdaha, their fear turned to be true as they Indian girls failed to succeed, coming so close, and yet, falling that tiny bit short.

“I was apprehensive about the Ghoshs of 2005 and anxious of break down under pressure. My fear came out as reality”, said Jhulan’s father Nisith Goswami, a retired Indian Airline employee.

A pall of gloom descended in Lalpur soon after Rajeshwari Gayakwad was bowled by Anya Shrusbsole. Many of the local boys and girls broke down in tear who were eagerly waiting to celebrate the victory of team India.

Jhulan’s mother Jharna, who for the past two days holed up inside her ‘Thakur Ghar’ praying for the country broke down too in tear. Jhulan’s younger sister Jhumpa was also not an exception.

Today’s Jhulan’s performance was very crucial. She provided the team an early break. She concluded her spell with an impressive 3/23. But, her personal feat could not to pay off for the team. Her mother Jharna Goswami, who broke down in tears after the match said: “This defeat is very much painful to me. It is quite unexpected to me. I hoped that God will give our girls courage to come up as winner. But, possibly he had a different plan. So the victory for team India remained elusive. Even though Jhulan today performed well, but it has little importance to me as India lost the title battle. I eagerly expected a win for team India as Jhulan would never play again in the world cup”.

Jhulan’s sister Jhumpa, an ICDS worker said: “We came so close, yet failed. We are quite hopeful of victory after England was restricted to 228. It was quite achievable score. Nevertheless, some rash shots by the middle order spoiled the prospect eventually. Mithali’s run out and later Veda Krishnamurthy’s out became the turning points of the match. India will play again in the world cup, we will support the team India again, but we will miss Jhulan and Mithali as they will no more be playing in the world cup”.

Gopal Sandhukhan (32), a resident of Lalpur, who once played with Jhulan at local Friends’ club said: “It is a long journey for Jhulan since she started playing cricket. At personal level she achieved many miles stones like ICC’s best cricketer of the year, topmost wicket taker, but for her the world cup title remained elusive and for us as well. She would probably play cricket for one or two more year, but not the world cup again. So the pain of this defeat despite being so close to success would haunt her”.