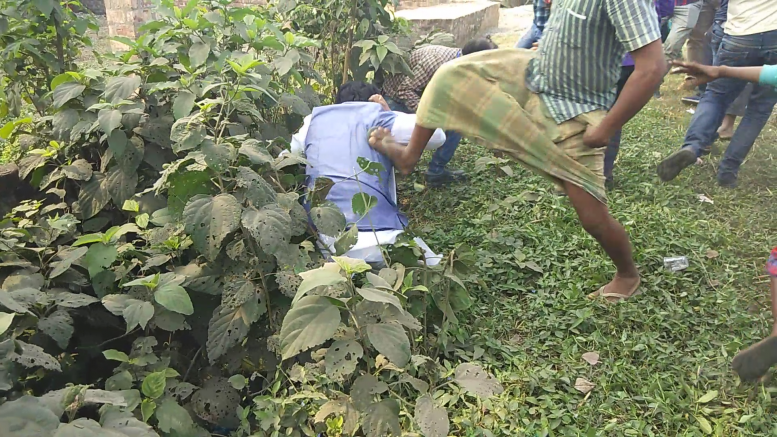 Karimpur, Nov. 25: Bengal BJP vice president and party’s Karimpur candidate Jay Prakash Majumdar was allegedly thrashed and kicked into a roadside ditch by suspected Trinamul supporters outside of a polling station in Ghiaghata village during the assembly byelection on Monday afternoon.

The incident prompted the BJP to lodge a complaint before the Chief Election Commission which later sought a report from the Nadia administration. Angry BP supporters blocked roads in many places across the state in protest of the alleged attack on Majumdar.

The alleged attack was led by the suspected Trinamul supporters barely a minute after he came out of a polling station in Ghiaghata village protesting cooking food inside apparently for the party workers.

A mob dragged the BJP candidate towards the edge of the road, punched him repeatedly and when he was falling on the ground, a middle-aged man kicked him on his back that landed him into a roadside ditch.

The bizarre incident occurred at Islampur primary school under Karimpur-II block in front of the central armed police forces at about 11.35 AM, who, however, lathi-charge to disperse the mob that was allegedly intimidating the voters to enter the polling station.

The incident prompted BJP to launch a statewide agitation including road blockades in several places later on the day. BJP leadership has lodged a complaint against nine suspected Trinamul supporters of whom police have detained one. Jay Prakash’s security was increased after the attack