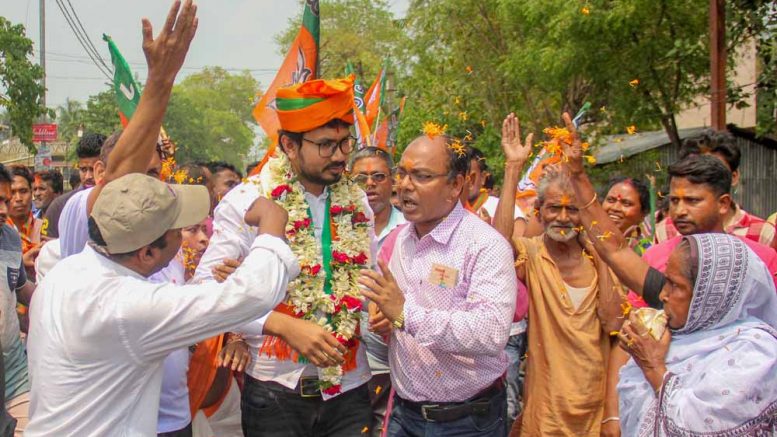 Ranaghat, April 4: BJP candidate for Ranaghat constituency Mukut Mani Adhikari, a government doctor, will not be able to fight the ensuing lok sabha poll since the state health department refused to accept his resignation.

Adhikari is a doctor with Nadia’s Badkulla Primary Health Centre, who submitted resignation to fight the poll being nominated by BJP as a party candidate.

But,  in a communication addressed to chief medical officer of health (Nadia) through which Adhikari, submitted his resignation, the Commissioner of Department of Health and Family Welfare has categorically stated that his “prayer” cannot be accepted since he has not completed the mandatory period of five years of continuous service since the date of joining.

Adhikari, a resident of Majhdia, had joined service in last year after serving as a house physician at Bangur Institute of Neurosciences.

In the communication dated April 2, the Commissioner has also quoted amended sub rule (1) of Rule 34 A of the WBSR (Part-1), which was notified vide No. 4499-F(P) dated 26-08-2016 to refuse Adhikari’s appeal for resignation from West Bengal Health Service.

As per law any government official if intends to fight election, should submit resignation prior to submission of nomination and enclose the approval with his nomination.

Now with rejection of Adhikari’s resignation as well as with only just four days left for submission of nomination, an uncertainty has gripped the BJP leadership in Nadia over nominating a new candidate to fight the poll in Ranaghat.

The letter of the Commissioner has came as a big shock for the party workers as well as Adhikari, who has been campaigning vigorously since his name was announced as the candidate.

Meanwhile, rejection of Adhikari’s resignation, appears to be a big blow to the BJP, which is expecting to win the Ranaghat seat projecting him, as a new generation leader with a Matua identity.

A heart broken Adhikari termed the rejection of as a planned “conspiracy” by state government on the instruction of the ruling party.

“It is ploy to deny me to fight the poll so that their candidate can get an edge. I will, however, not give up hope. The party leadership will fight for me at the appropriate level”, he said.

The BJP leadership, however, planning to appeal before the Election Commission and also contemplating a legal battle.

Party’s Nadia North unit president Jagannath Sarkar said, “Our state leadership has been informed. They would take the right decision. Meanwhile, we are keeping all options open”.

BJP sources said, the party, meanwhile, as an alternative might nominate Archana Majumder, a medical officer of Ministry of Urban Affairs who is posted in Kolkata.

“Her name was initially proposed as a candidate from Ranaghat. Now if nominated she also needs to resign from her service as Medical Officer. However, as a central government officer, it will not be a big problem for us to obtain the approval of her resignation”, a BJP leader said in Kolkata.

In Jalpaiguri party faced a near similar situation and had to field Dipen Pramanik when acceptance of resignation of its candidate Jayanta Roy, a government doctor, was delayed.