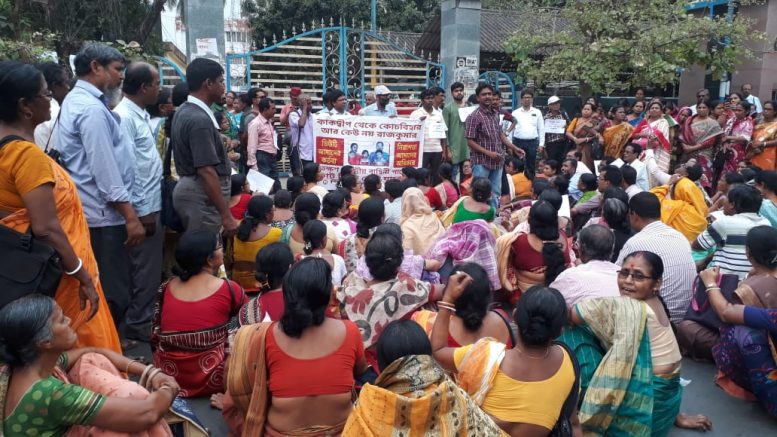 Krishnanagar, April 10: A demonstration of about five hundred polling personnel which include teachers and government employees left the Nadia administration in an embarrassing situation as they vowed not to move from poll items distribution centres on the day before the poll unless central forces are deployed at all the polling stations in the district ensuring their security .

The angry polling personnel which include a number of women employees, staged a demonstration in front of the main entrance of the administrative building in Krishnanagar and later submitted a deputation before the District Election Officer appraising their demand.

A teacher who participated in the demonstration said, “The lack of security at the polling station claimed a life of a presiding officer during the panchayat poll in 2018. The political situation in the state since the panchayat poll has aggravated further and the polling personnel have become the soft target of the political parties and miscreants backed by them. So we strongly demand that the administration should ensure that there would be enough security in and outside the polling stations with the central forces. We have no confidence on the state police personnel due to past experiences”.

An officer of Nadia administration in Krishnanagar said, “The demand is quite uncomfortable for us. The demand amply proves lack of confidence on the state police personnel”.

Sources said, the agitation demanding central forces had actually begun in last month in Raiganj, where a Presiding Officer, named Rajkumar Roy was found dead on railway tracks on the day of the panchayat poll. He was kidnapped on the previous night of the poll from the polling station. The investigation so far could not unravel the mystery behind his murder that prompted the panicked polling personnel to launch the agitation which eventually spread across the state including in Kolkata. Police sources said, the BJP leadership has been backing these polling personnel in a deliberate manner.

During the past few days polling personnel at various training centres have demonstrated demanding central forces to ensure their security. “We have been suffering from a fear since the Raiganj incident. We met the chief election officer of Bengal on Monday when he assured about deployment of central forces at all the polling stations in the state. But, today were shocked when learnt that only about 50% of the total polling stations in North Bengal district have been provided with central force personnel”, a government employee who has been assigned the job of presiding officer said.

An officer at district head quarter in Krishnanagar said, “If polling personnel refused to go to polling stations without central force jawans, it would create a major problem for us. Moreover, if this demand is accepted now, similar demand would be raised later during Municipality poll..”.