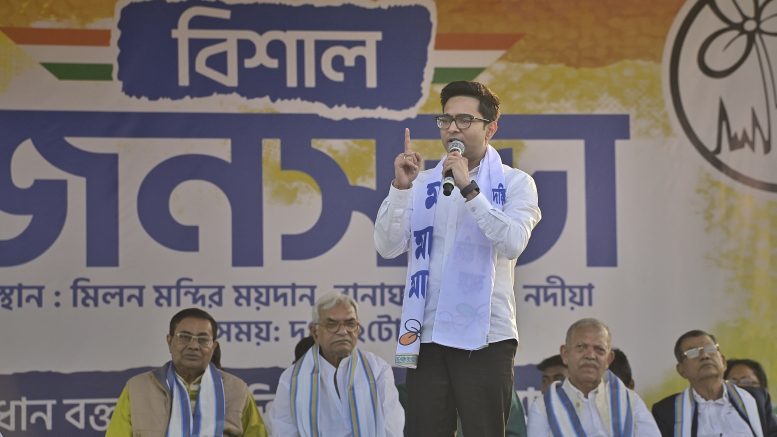 Ranaghat, Dec. 17: Trinamul National general secretary Abhishek Banerjee has accused the BJP of lying about the Citizenship (Amendment) Act, 2019 and stated that the saffron party has been deliberately trying to ‘fool’ people ahead of elections. He also alleged that the BJP has nothing to offer new for the Matuas since its government at the centre couldn’t frame the rule so far even after the act was passed three years ago. He said offering citizenship through CAA to all bonafide citizens like Matuas who have been staying for a long in the country is an “insult”.

Speaking at a public meeting on Saturday in the Coopers area of Nadia’s Ranaghat, which is known to be a Matua belt, he said that the CAA is the only act in the country that even after being passed in the parliament could not be framed as the rule and implemented.

“Rules for almost all the acts passed so far in the parliament were framed barely within a month. But, why so much time is taken to frame rules for the CAA…The reason is to make people booby and to mislead them”, Abhishek Banerjee said.

Explaining how the saffron ecosystem has misled the Matua community over their purported identity crisis, the Diamond Harbour MP said, “It was during December of 2019 the Citizenship Amendment Bill was passed in the parliament. But three years have passed since then, yet no rule has been framed…It is only because they are lying and have nothing to offer”.

“The Citizenship (Amendment) Act is being used by the BJP to fool the people of our country”, Abhishek added further.

Abhishek acknowledged that a section of party workers and elected representatives at the local level committed some wrongs that might anger people, but he urged people to raise questions about the delay in framing the rules and provisions.

In October this year, the parliamentary committee on subordinate legislation granted a fresh extension – the seventh time ending December 31, to the Union Home Ministry in Rajya Sabha and up to January 9, 2023, in the Lok Sabha. segments under the Matua-dominated Ranaghat parliamentary seat. The result was the same in the 2019 Loke sabha poll when the BJP riding on its “citizenship” assurance won the hearts of the Matua community that once was a strong support base for the ruling party.

To retain the support base among the Matuas and to consolidate its position in the ensuing panchayat election, Trinamul has decided to penetrate the area raising the issue that has recently created restlessness among the community over the delay in its implementation.

Last month Mamata Banerjee visited Ranaghat and urged members of the Matua community not to be ‘misled’ by the BJP and urged them to repose faith in her.

Party insiders claimed that a recent study conducted by the party revealed that the harassment by police in obtaining police clearance for verification of identity for a passport has become the main reason for the dissatisfaction of the Matua community.

In an attempt to win the confidence of the community, Abhishek assured to solve the problem within “three months”.

“I know that you have a problem over verification of passport…you are often harassed by the DIB officials of Ranaghat, Krishnagar, and Bongaon… I seek three months times from you to simplify the process so that the problem is solved”, he announced.

Abhishek later instructed party workers and the elected representatives working at the gram panchayat level to ensure transparency and to work in close proximity with the people at the grassroots level. He apologized for the inhuman and corrupt practice of a section of party men that prompted people to reject the party in the last two elections in the Ranaghat area. “Kichu loker jannyo manush mukh firiye nichchey….eta choltey debo na”, he said adding that people would recommend candidates for nomination in the panchayat election. Abhishek also asked Tatla panchayat Pradan Partha Pratim De in Chakdah to submit his resignation by Monday since he failed to come up to the expectation of the people. He also announced that the party is in a process of transition and that no violence and malpractice in the panchayat election will be tolerated at all.