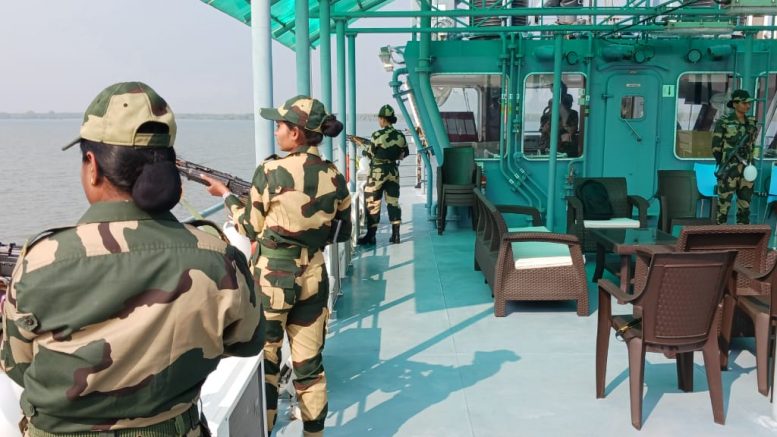 BSF's women commandos on a patrolling vessel in Sundarbans

Basirhat/Kolkata: Border Security Force for the first time has deployed a platoon of women commandos for surveillance on the difficult riverine terrain of the Indo-Bangla border in the Sundarbans delta spanned over the North 24 Parganas district providing them with a dedicated floating Border outpost (BOP) that is equipped with sophisticated arms and devices. BSF authorities said that only women personnel henceforth would exclusively conduct surveillance and undertake area domination in the riverine delta. The prime objective of such deployment is to thwart cross-border smuggling activities in which a section of women living in the delta is involved, BSF officials claimed.

At the same time, their efforts will be to save the fishermen from the pirates, rescue them from sickness, and also to protect the wildlife and mangrove from poaching and felling

The Indo-Bangladesh border is spanned for about 93 km in North 24 Parganas district starting from Swarupnagar to Samshernagar, of which a stretch of 40 km is riverine alignment. This has made the surveillance quite a difficult task for the BSF in the dense forest areas of Sundarbans which is consisting of 102 small islands on the Indian side.

Since the river alignment literally works as the physical border where the erection of barbed wire fencing is not possible, this long stretch has become vulnerable to smuggling activities, BSF sources said.

To overcome the problem of area domination and to secure the border in the mighty Sundarbans, union home minister Amit Shah during May this year had launched six floating Border Outposts (Sutlej, Narmada, Kaveri, Sabarmati, Krishna, and Ganga) for BSF. Among those one vessel – Ganga has now been exclusively provided to the women’s team entrusting them with the responsibility of ensuring the security of the riverine alignment.

A spokesperson of BSF’s South Bengal Frontier in Calcutta said, “Securing the riverine border in the Sundarbans is a challenging task. The smuggling of cattle, drugs, and infiltration through the riverine stretch is a major problem. Since the construction of the pucca border outpost is not feasible in this riverine stretch, our personnel conduct round-the-clock surveillance using the floating BOPs. Now our women’s team will look after this entire riverine stretch”.

“Since many women are involved in smuggling activities, combating it requires women commandos for obvious reasons. At the same time keeping a close eye on the mangrove and protecting the wildlife are also very important, which they would do in coordination with the police, forest officials, and local people”, BSF sources said.

“This is a big step. We have for the first time deployed women to protect the international border that passes through the marshy and difficult area surrounded by vast dense forests and rivers. This is an endeavor in other terms symbolizes women’s empowerment”, a senior BSF official said.

BSF’s South Bengal Frontier’s DIG (G) Amerish Arya said, “Our brave women guards have now taken over the front of border security through the floating BOP – Ganga and they will be seen independently in the combat role now. There will be no male personnel and the women’s team will do the entire job, which will be especially helpful in preventing smuggling by women”.

Seema, a sub-inspector, of the BSF’s women’s team said, “This is a new experience for us. Earlier we used to undertake patrolling along the fenced border areas. But for the first time, we would be looking after the difficult riverine belt with bigger responsibilities for which we are physically and mentally prepared”.