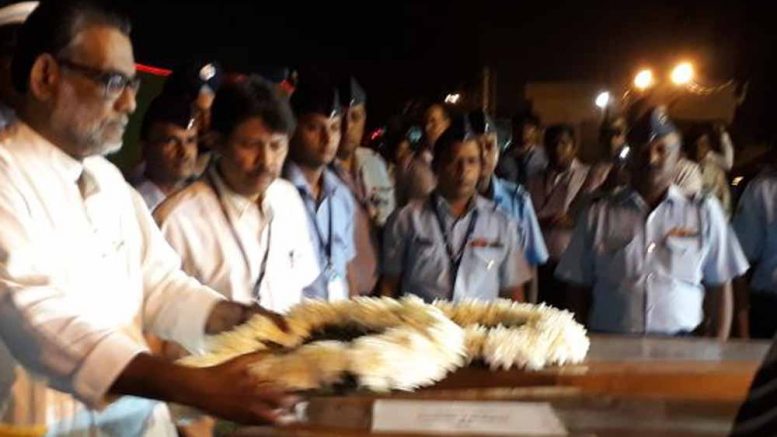 Kolkata: Khokon Sikdar of Nadia’s Tehatta and Samar Tikadar of Chapra today returned India dead, nearly after four years since they went missing from Iraq where they went to work for a Turkish construction company. Their mortal remains packed in coffins reached Kolkata airport via Amritsar and Patna from Mosul city of Iraq on Monday evening. The bodies will finally be handed over to their kin at JNM Hospital morgue in Kalyani on Tuesday morning, where they bodies arrived late in the night. In last month external affairs minister Sushma Swaraj announced in Rajya Sabha that the 39 Indian labourers were killed and buried by ISIS militants after they were kidnapped from Mosul. The Minister told the Nation that mortal remains of the laborers were exhumed from a mass grave and identified following a DNA test.

On Saturday Minister of State for External Affairs General (retired) VK Singh flown to Iraq in a special aircraft of Indian air force to supervise repatriation of the bodies. The aircraft today returned India and had landed first at the Sri Guru Ram Das Jee International Airport in Amritsar at around 2.30pm where 26bodies were handed over to the Punjab Government. The aircraft later went to Patna and finally land at Kolkata at about 7pm.

“Family members of the deceased laborers have been advised not to open the coffins even for a glimpse of the body remains and to complete the last rites as early as possible” – MEA Official.

In Kolkata, the coffins were later handed over to the state administration. Minister Purnendu Basu received the bodies

Coffins of Body remains of 38 Indians

on behalf of the state government. He also paid his tribute to the departed laborers. Senior officers of Easter Command also paid floral tribute to the laborers. The bodies were then handed over to the officials of Nadia district administration. On behalf of the Nadia district administration joint block development officer of Tehatta-I block Bidhan Biswas and block fisheries officer Tapas Purakayte received the body remains, who then too it to JNM Hospital at about 9.30pm. The bodies packed in two coffins were kept in freezer under care of a team of forensic experts at the JNM Hospital.

At 7am on Tuesday, a convoy will resume journey with the bodies after they are formally handed over to the kin.

From Chapra the convoy will be divided in two parts, one will head to Mahakhola while the other would go to Tehatta’s Chitka village for the last rites. From Krishnanagar Tehatta’s Trinamul MLA Gouri Shankar Dutta will join the convoy and lead it to Khokon Sikdar’s residence in Chitka village. He would also supervise last rites to be held at a funeral ghat on the bank of river Jalangi.