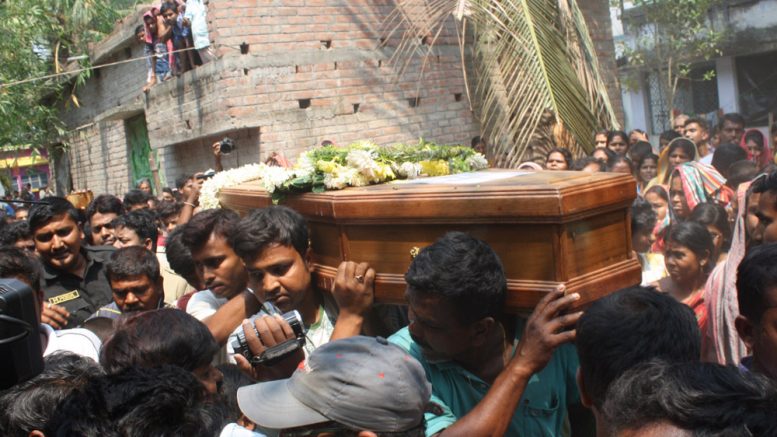 Tehatta/Chapra, April 3: The last rites of mortal remains of Khokon Sikdar of Nadia’s Tehatta and Samar Tikadar of Chapra, who were killed by ISIS militants in Iraq’s Mosul performed after their reached homes on Tuesday morning.

The exhumed body remains packed in coffins were arrived at Dumdum airport from Baghdad on Monday night and kept at JNM hospital morgue. Today officials of the Nadia administration escorted the bodies to two laborers houses in Chitka and Mohakhola village respectively from Kalyani, who worked with Tarkish Company.

While mortal remains of Sikdar were buried at the back of his home turf, Tikadar’s last rites were done at the Nabadweep funeral ghat. The neighbors took both the bodies for completion of the last rites within few minutes after arriving at home. “The body remains were in a very badly decomposed state and we were advised by the government officials to complete the last rites at the earliest without opening the coffin. Having a glimpse of the body remains was strictly prohibited”, a relative of Sikdar said.

In Tehatta, the coffin of Sikdar, however, was delayed to reach home as a section of local villagers allegedly backed by BJP, blocked the way of the convoy demanding compensation and job for the two victims’ family members. The villagers had gheraoed local Trinamul MLA Gouri Shankar Dutta, who was accompanying the coffin from Kalyani and demanded that he should, announced a state government job for the kin of the two laborers. The blockade was withdrawn around an hour later after the intervention of the police. A large crowd gathered at the houses of both the deceased laborers.