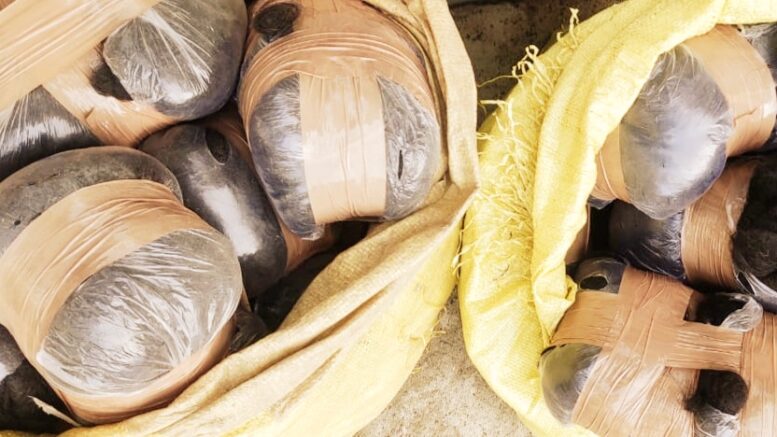 Kolkata/Krishnanagar, May 14: Sudden increase in smuggling of human hair to Bangladesh through the porous points of Indo-Bangla border under the Krishnagar sector amid the Covid situation has caused serious concern among the BSF authorities.

During the past few months, the South Bengal Frontier of the BSF has recovered around 2.25 quintal of human hair, worth around Rs.13.50 lakhs, which has a huge demand in Bangladesh for supply to the hair processing industries in China and at least 25 other country for making wigs and toy’s hair.

The cross border smuggling of human hair is not a new phenomenon. But, an unusual increasing trend of smuggling to China, Myanmar via Bangladesh became a matter of concern to the centre since it has affected the export of human hair.

The exporters also had drawn the attention of the centre as they wrote to the Directorate of Revenue Intelligence (DRI) to crack down on smuggling of human hair running into crores. At present human hair worth around Rs. 150 crores is exported every year.

Since January this year, the centre has launched a nationwide crackdown against such alleged smuggling through land routes. The MHA issued alerts to border guarding agencies like BSF, Assam Rifles and other security agencies to thwart such smuggling bids.

BSF sources claimed that human hairs sacrificed at temples often being collected apart from door to door basis in rural areas and smuggled to Bangladesh after the cleaning process. The operators of the smuggling rackets have engaged collectors who sell such hair at Rs.6000 per Kg, claimed a BSF officer posted at Krishnagar sector in Nadia.

A man in Nadia’s Chapra, who collects hair from rural areas said that the collected hairs are cleaned first, made bunches of 1 kg each and then packed for smuggling.

A spokesperson of BSF’s South Bengal Frontier said, “We came to know that these hairs are exported to a total of 26 countries, including China, UAE, and Malaysia. The collected hair went through a different cleaning process before the export”.

“Long hair of women is in high demand since those are the ideal ones to produce hair for toys. We came to know that a large number of people are involved with this trade in the bordering districts of Bangladesh”, the spokesperson added.

“We always remain vigilant to thwart any sort of smuggling activities. But, smuggling of hair and its recovery have developed a sort of vulnerability among the personnel. We have already arrested four persons involved with smuggling human hair and seized 225 kg of human hairs in 13 different incidents”, a senior BSF officer said in Krishnanagar.