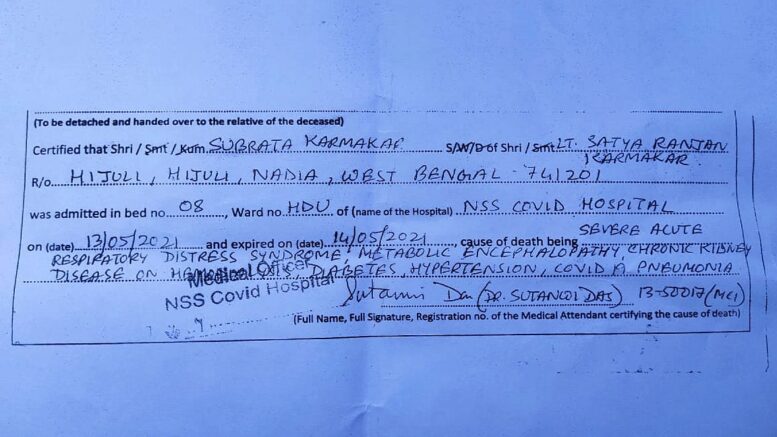 The "death certificate" of Subrata Karmakar

Kalyani, May 15: In a shocking incident, a Covid patient was found alive after the Kalyani based Covid hospital – Netaji Subhash T B Sanatarium, where he was admitted, declared him dead on Friday.

The hospital authorities that also issued the death certificate for the Ranaghat based patient – Subrata Karmakar, 28, and called his father Satyaranjan to visit the hospital to issue ‘No objection certificate’ for disposal of the body, written him as dead prefixing the word ‘late’ before his name being the father of his ‘deceased’ son.

Having lost faith on the hospital authority, the elderly parents of the youth got him discharged and took home for treatment, even though his condition remained quite critical.

The incident came as a sheer embarrassment to the Nadia district administration. Chief Medical Officer of Nadia Aparesh Bandopadhyay has acknowledged the ‘mistake’ apparently on namesake as a patient with the same name died at the hospital on the same day.

But, he could not confirm if the name of the father and his address of the patient actually died were the same with the alive patient for whom the death certificate was issued.

On Thursday, Subrata Karmakar, a resident of Hijuli village in Ranaghat was admitted at the high dependency unit of the Kalyani based Covid hospital with several co-morbidity factors.

He ‘died’ on Friday morning. The death certificate said that the patient died due to – “Severe acute respiratory distress syndrome, encephalopathy, chronic kidney disease, diabetes, hypertension, Covid 19 pneumonia”. The information of his demise was communicated to his father.

“A nurse called me to attend the hospital to identify the body and to issue the NOC as well as to receive the death certificate”, father of the ‘deceased youth said.

However, the elderly couple was asked to wait until a corpse handler arrives to show the body. During the evening he came when the death certificate was handed over to the couple. The corpse handler brought a body for identification, but it was not their son. This led the man to begin a search calling the ‘deceased’ by his name inside the ward, when Subrata found alive as he responded to the call.

“It was an amazing experience. Once we rejected the body shown to us that of our son, the corpse handler went inside the ward and spotted our son alive. He called him by his name when our son responded. Later we saw our son alive on bed through a window of the ward….it was like the rebirth of our son”, said the father of the youth.

Aghast over the turn of events, the youth’s parents stormed the hospital and had a brawl with the staff seeking an explanation. They later got their son released and took home.

“It is more than sheer negligence. The hospital authorities are so negligent that they also wrote me dead prefixing ‘late’ before my name as the father of the deceased. This is quite unfortunate”, father of the youth said.

SDO Kalyani Hirak Mondal said, “I have heard about the incident and sought a report from the CMOH”