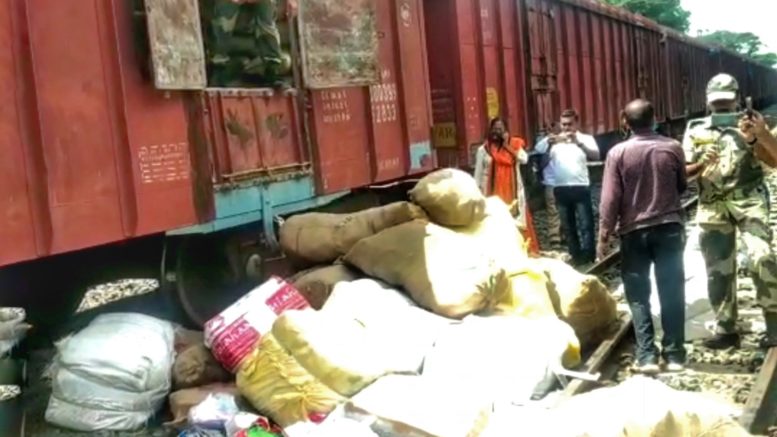 Cartoons being recovered from a wagon by BSF personnel in Gede.

Gede, July 20: A patrolling team of BSF has seized goods worth Rs.46.5 lakhs from a rail wagon in Nadia’s Gede while being smuggled to Bangladesh through a goods train on Sunday. The goods were noticed by the BSF team in the wagon whose door seal was found tampered barely a few minutes before the train was scheduled to leave Gede, the terminal station (India), for Darshana in Bangladesh after the final round of the routine check was done.

The BSF authorities have expressed serious concern over the matter who suspect involvement a ‘mole’ and negligence of a section of government officials behind the incident.

The commanding officer of the BSF’s 54-battalion has lodged a complaint with the Customs authorities seeking an investigation into the matter after depositing the recovered items, which include 30 cartoons containing foot wares, cosmetics, mobile phone, medicines, Benarasi Sari, phensedyl, and other items… The BSF authorities at the same time have apprised the top authorities of Railways seeking a necessary investigation into the matter on their parts as well.

Sources said that Bangladesh bound goods train are usually checked on multiple times at the Gede rail station by a combined team of Customs, Railways, and BSF officials before such trains leave for Darshana in Bangladesh. On Sunday after the final round of checking was done for the departure of the train, the BSF officials noticed that the seal of a container from the engine end is broken. Peeping through the door of the wagon, the BSF officials noticed cartoons stacked inside it in a suspicious manner.

“We opened the wagon to check the items and found 30 cartoons which eventually found containing medicines, sari, mobile phone, footwear, and many other items being smuggled to Bangladesh. It is quite surprising to us how despite strong surveillance such a huge quantity of goods loaded inside the wagon so far while the final round of checking done a little before”, a spokesperson of the South Bengal Frontier of BSF said in Calcutta.

Commanding officer of 54-Battalion Deshraj Singh said, “This is the second consecutive of instances of seizure of similar nature from a goods train during the past one month. On both the occasions our personnel foiled the attempt of smuggling”. Early this month BSF authorities nabbed a Bangladeshi at Petrapole land port while trying to sneak into the Indian Territory by traveling on an empty wagon from the neighboring country.

Expressing concern over the incident a senior officer of BSF’s South Bengal Frontier said, “Such a serious lapse cannot take a place without the negligence or connivance of black mole in the government system…” The officer, however, refused to clarify if he is raising his finger towards the BSF personnel as well as to Customs and Railways officials who monitor the multiple checking.

“We are worried since after clearance for the departure of the train was conveyed by the Customs and railways officials following their final checking and completion of all formalities, such recovery of goods from the train is quite unexpected to us. We have requested the Customs and Railways authorities to find out the black mole in the system, else there may be a serious security problem in future”, the BSF officer added.