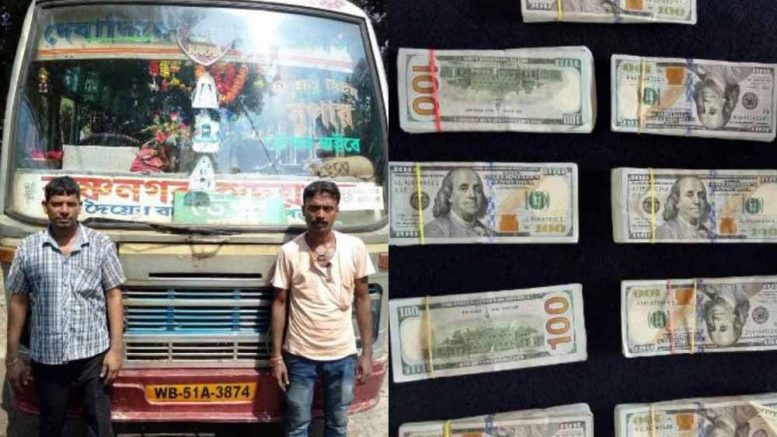 The Bus and the recovered US dollars

The 81-BSF Battalion team and the arresrted persons

Krishnanagar, Oct. 12: An ambush team of 81 battalion of Border Security Force (BSF) today recovered 88200 US dollar  from a private bus in Bedberia village of Nadia’s Chapra. The amount was kept in a bag in the form 882 notes of ‘100 US Dollar’ denomination. The amount was evaluated as Rupees 57-lakh 42-thousand thousand and 702.

A BSF Official said that on the basis of a tip of the ambush team raided a bus of Krishnanagar-Hridaypur route and recovered the amount. A BSF team of 81-Battalion intercepted the bus in Betberia.”  There were five persons inside the bus. The US Dollars were kept in a bag. However, none of the five passengers claimed the bag when we asked about its owner. As it appeared that the were deliberately trying to disown the bag containing the currency, we detained all of them including the bus driver and the conductor”, a BSF official said. They were later handed over to Customs officials including the US Dollars.“The amount was brought to India from Bangladesh and being taken to Calcutta.