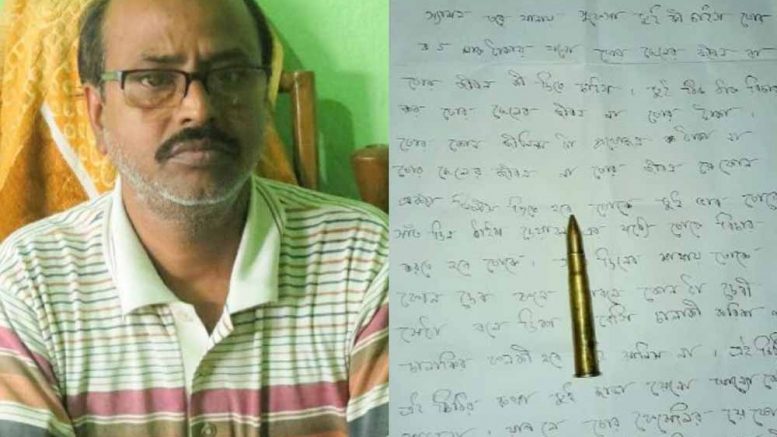 Karimpur, June 3: Police have started investigation on a complaint by a businessman who allegedly received an extortion letter on Saturday night with a bullet enclosed inside the envelope threatening to kill his 15 year old Madhyamik examinee son unless he paid the money.

The fictitious writer of the letter has categorically threatened businessman Shyamal Chakraborty (46), a cement dealer in Karimpur town, to be prepared to lose his son Saibal, this year’s Madhyamik examinee, if he tries to save his money.

Chakraborty, who resides in Ramkrishna Pally area in the town, has lodged a complaint at Karimpur police station on Sunday morning apprehending threat on his son’s life as well as of himself.

He has also appraised the Karimpur Bazar Byabsyee Samiti about the incident and sought it’s help for taking up the matter with the police administration.

Trouble began for Chakraborty a little past 10.45 on Saturday night when he returned home after closing his shop. As he entered home, his mother seen the envelop lying close to the main gate when she was locking it for the night.

Chakraborty opened the envelop that contained the letter written with blue ink on a white paper with a bullet of rifle enclosed with it.

“I felt afraid after seeing the bullet and reading the letter. It was a daring demand for extortion with threat to kill my son if I don’t oblige. I immediately called police, who came and examined the letter, the bullet and also asked me several questions ti find out a possible link behind the threat letter. They kept vigilance around my residence. Nevertheless, today I submitted a written complaint to police along with the  bullet”, Said Chakraborty.

Chakraborty said, “The language of the letter is quite alarming. I have no idea who could be behind it. On many occasions I have had altercations with my customers over payment failure and also had tiff over land with some of my relatives. Nevertheless, I suspect none of them as they are not such a type who could kill my son to settle personal score with me”.

The letter has meanwhile, left businessman’s son 15 year old son Saibal panic-stricken. The boy waiting for his madhyamik result has stopped visiting outside.

“I am really concerned about my son. I have requested police to find out the mystery. Even if anyone has made a prank to make fun of me, should be punished  well”, Chakraborty said.

An investigating officer of Karimpur police station said, “We have registered a complaint and examining all possible aspects. We are talking to the businessman and examining his statement to find out a clue behind the threat letter. Meanwhile, we have kept his house under surveillance, particularly during night to notice any suspicious movement”.

Subodh Kumar Roy, secretary of Karimpur Bazar Byabsayee Samiti said, “The matter is quite concerning. The businessmen often become soft targets of criminals. We have told police to find out the culprits soon who have unleashed panic among the businessmen in the town”.