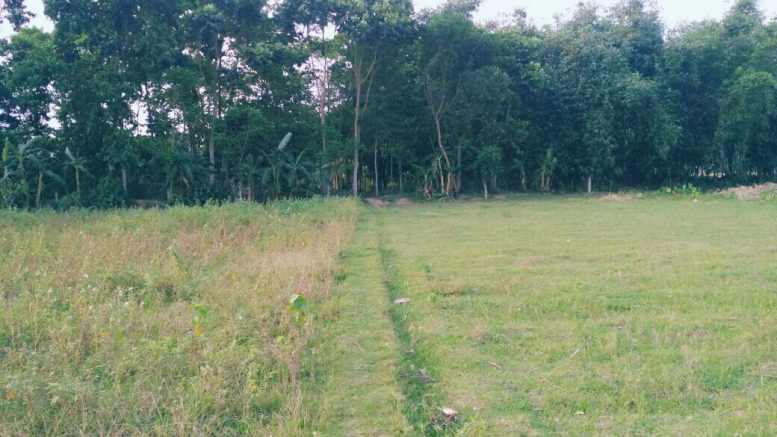 Chakdah: Around fifty families in Sutro-Mathpara village of Nadia’s Chakdah have stopped cultivation in 16 acres land for about past two years due to fear of snake bite. The sprawling multi-crop land has been left desolate after 15 farm laborers were bitten by snake in 2016 and five of them died while working there. The situation is so grim that in past two years people even do not dare to visit a pond located close to the land. Villagers claimed that in last one year they have killed over 100 venomous snakes mostly chandrabora (Russell’s viper), while this month they killed 15 such snakes so far.

The villagers sought help of local Tatla-I panchayat authorities, but it failed to provide a solution so far. This has created a crisis in their living as most of the villagers have forced to opt alternative ways for living. A Russel’s Viper (Chandrabora) killed by villagers recently in Sutro

Members of a science organization who work for awareness on snake visited the village early this month responding to an appeal by the villagers and taken up the matter with local administration while suggesting some protective measures against snake bite.

Trouble began for people in Sutro-Mathpara around three years ago when around one hundred families settled in the village and constructed their houses clearing jungles and bushes. They also owned land left barren for years and started agriculture works clearing bushes and wild plants.

Amit Ghosh, a youth who runs poultry and escaped a snake bite early this week said, “There was large area covered with dense bush in the village. I apprehend snakes were also there. But, the ecological balance was disturbed when a major part of this bushy area was cleared to set up new houses. Situation changed further when these people also owned barren left for years and started agriculture works cleaning it. The land was very fertile which prompted them to expand agriculture cleaning more areas. The spates of snake bite begin during this time”.

Gourpada Ghosh, one of the villagers who stopped agriculture works in the land said, “The number of snakes increased in the gradually since a section of the villagers settled in the area started killing monitor lizards (gosaap) in random way to satisfy their tongues. These monitor lizards act as predators to viper snakes in particular maintaining a balance, which was seriously damaged. This led to a huge increase in number of snakes in the area”.

Villagers claimed that during the past two years visibility of snakes increased largely making their living terrible.

“The trouble of snakes began during 2015, when few people died. But, we took it casually. But, things turned horrible gradually as snake bite became a regular affair in the paddy fields. The vipers roam in the fields to catch rodents and bite farmer instead. We gradually compelled to stop farming as many people were bitten by snake. While some died many survived after treatment but impact of venom made them ill and panicked”, said Amit.

In last year panicked villagers killed over 100 viper snakes and few cobra as well as the snakes now have entering household areas.

“Now snakes entering our houses, cow shades, crop stocks making life miserable. In this month we have so far killed about 15 vipers. I am escaped a bite yesterday when a viper entered my poultry farm”, he added.

President of Chakdah Biggyan O Sanskritik Sanstha Bibartan Bhattacharyya said, “Killing the snakes will not solve problem. We have requested the local administration to release monitor lizards in the area. At the same time, awareness needed to be developed to protect these monitors. We requested the local administration with take up the issue with the forest department. They can engage their officials snake catchers to catch snakes and keep it at the rescue centre”.

Retired Range officer of state forest department Amalendu Roy said, “It is a proven fact that snakes avoids monitor lizards. The monitors often seen seen attacking snakes and even eat them. It is like predator to snakes, particularly to the venomous species like vipers, cobra and many others”.

“It would be a practical idea to release monitors in an area highly infested with snakes. Alternatively releasing mongoose, would not be so effective unlike common belief, as the mongoose behave in irregular manner and cannot match big venomous snakes like vipers and cobra. But, monitors kill snake and also eat it” – Amalendu Roy, Retired Range Officer, WBFD.

Divisional forest officer (Nadia-Murshidabad) Rana Das said, “We will first visit the area to assess the situation at our level and decide remedial measure”.
Share the news