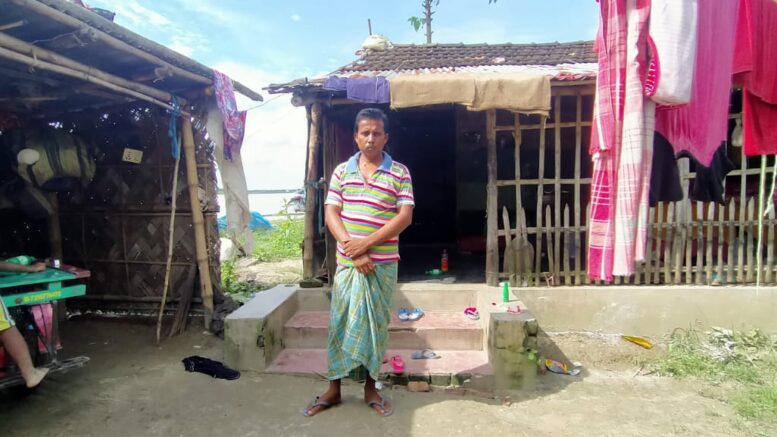 Bijoy Chowdhury in front of his house facing erosion threat

Chakdaha, Aug. 29: At least 16 families of ‘Dom’ community in Gournagar area of Nadia’s Chakdaha who either lost their home due to erosion of the Hooghly river bank or facing the threat were denied rehabilitation on government land by the local panchayat authorities because of opposition by a section of people belong to upper caste.

The Chanduria-I gram panchayat authority run by Trinamul Congress could not dare to ignore the resistance since they apprehended that insisting such rehabilitation could create erosion in their vote bank which seriously suffered during the last Loke Sabha election in the area.

The incident came to light early this week when Bibartan Bhattacharjee, a social activist from Chakdaha town sought support for these families from SDO Kalyani Dhiman Barai.

“We often heard that Bengal is an exception when it comes to caste prejudice. But, it is actually a myth that always gets torn apart whenever a conflict of interest develops. The Gournagar incident put Bengal on the same line with Bihar, UP and some North Indian states where such incidents often occur”, Bhattacharjee said.

The members of the ‘Dom’ community are enlisted as scheduled castes (SC) who are generally known as ‘corpse burners’ for their support during the last rites in burning ghats. But in the transition of times, many families of this community including the five families of Chakdaha are engaged in different professions.

The area being erosion-prone, the district administration in last year took an initiative to issue patta with a view to rehabilitating the erosion victim families on vested government land in the adjacent Mathpara area. At least two families were also issued Patta (land rights). But the panchayat authorities did not allow them to move there apprehending a ruckus. As a result, while four families rendered homeless forced to take shelter on the side of a village road under a tarpaulin shed, the one couple Bijoy and Bina Chowdhury compelled to wait at their home located on the edge of the riverbank despite a sizeable part of it has already eaten up by the river.

Bijoy, who pedals trolley van said, “I shifted my house at least two occasions earlier due to erosion. I bought this 3.5 cotta land eight years ago, but this would soon be lost in Hooghly. I don’t know where to move now since the local panchayat officials expressed their helplessness to shift us to a land where some other families were shifted”.

“Our only fault is that we belong to the Dom community… A few weeks ago before the beginning of a fresh spate of erosion, I appealed to the local Trinamul leaders to help us. But, they refused to help and marked a piece of land for us under an electric transformer. But we could not move there in fear of accident”.

Sources said a total of 16 families suffered due to erosion in the area. The panchayat authorities proposed to shift them all to government land in Mathpara. But, trouble began when a section of the people from the upper caste living in the area raised objection about their rehabilitation three.

A person in Mathpara on anonymity said, “They have a different culture and lifestyle with which we cannot make a compromise. So many like me in the area we advised the party to allot land in a separate place to avoid any conflict”.

“We often heard that Bengal is an exception when it comes to caste prejudice. But, it is actually a myth that always gets torn apart whenever a conflict of interest develops. The Gournagar incident put Bengal on the same line with Bihar, UP and some North Indian states where such incidents often occur”. – Bibartan Bhattacharjee, social activist

A Trinamul leader in Gournagar said, “We were helpless as our own party activists raised an objection. We could do nothing in the face of their resistance”.

Kalpana Chowdhury, a member of one of the victimized families said, “It is quite unbelievable that a party which speaks for common people could be so inhuman. I heard hatred over caste outside Bengal…but never imagined that we would be the victim of caste-based discrimination”.

Kalpana and his husband Gurudas, who run a tea stall on the bank of the river said, “We were allotted patta for rehabilitation. But, local Trinamul leadership ignored it and settled other people on the land who did not suffer much damage to erosion.”

“We run a tea stall and people from different class and community take tea from us and never raised any question about our caste” Kalpana added.

While local panchayat member Minati Biswas refuted the allegation of ‘caste bias’, claiming “no land to

accommodate the families”, senior Trinamul leader and Nadia Zilla Parishad member Tibrajyoti Das admitted that caste bias had come in the way of the resettlement of the 16 families at Mathpara, “I was shocked to learn about the objections raised by some people. Such a mindset is unacceptable. The incident is inhuman. I am against such discrimination and will convince the people to come out of such mindset”, Das said.

SDO Kalyani Dhiman Barai said, “It is definitely shocking if the allegations are true. I have already asked the BDO Chakdaha to conduct an inquiry into the matter. We would take up the issue with the land department and would do whatever felt necessary to help the help families at the earliest”.