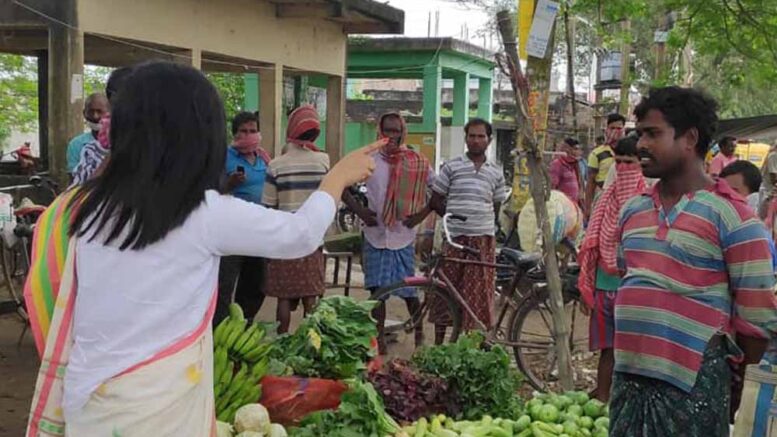 Krishnanagar, Sept. 8: The Nadia Police would launch a fresh crackdown from Wednesday against errant people who would be spotted roaming in public places without the mask.

As per the Covid safety protocols, wearing a mask is mandatory for people visiting public places. But, in Nadia people seen roaming without masks in a large number in markets and other public places whereas the number of positive Covid positive cases increasing alarmingly in the district for the past one week.

Since September 1, Nadia has recorded 875 new Covid positive cases that created a fresh concern among the officials of the District administration.

The fresh spike has apparently led the police to launch the crackdown as senior officials think that apparent relaxation offered during the ongoing unlocking phase has indulged a section of people to go careless, particularly in the rural areas.

The desperation to flout the safety protocols became evident when a section of people in Tehatta argued with Krishnagar MP Mahua Moitra after she got off her car and advised them to wear masks. The MP later posted a video statement on her Facebook page conveying a warning for strict police action from Wednesday for violation of safety norms.

The incident eventually led the Tehatta police to book people roaming without masks. Till late in the evening 42 persons were booked for not wearing masks. The number of arrests in the Krishnagar police district was 125. Police charged the violators under 51 (b) of the Disaster Management Act as well as under section 188 of IPC.

On Wednesday parliamentarian Mahua Moitra on her way to attend an administrative meeting in Kaliganj got off her car at a number of places and advised people to put mask on their faces. But, many of them ignored advice while many of them begun arguing with her.

Later in the video statement, she said, “I have been trying to make people aware of the danger being without the mask, but it appears to be of no use…people are careless…I am fed up”.

She said, “I am shocked to see the sheer carelessness among a section of people. In rural areas, many people are not using face masks and following the safety norms whereas the numbers of positive cases are increasing alarmingly in the district. While in other countries the numbers of positive cases are decreasing, we are having an opposite picture only because of such carelessness”.

“If this is going on we will close the shops and markets and take rightful action against the violators. The police will take on streets from Wednesday to book such people”, she added.

A senior official of Nadia administration said, “This is primarily the duty of the police to enforce such protocols. We have sought their help”.

SDO Tehatta Aneesh Dasgupta said, “Police have begun their work. There will be a fresh drive in several areas from Wednesday which needed to be sustained”.

Additional SP Tehatta Krishanu Roy said, “We have undertaken crackdown in several areas under the Tehatta subdivision today. People violating safe norms will not be spared at all”.