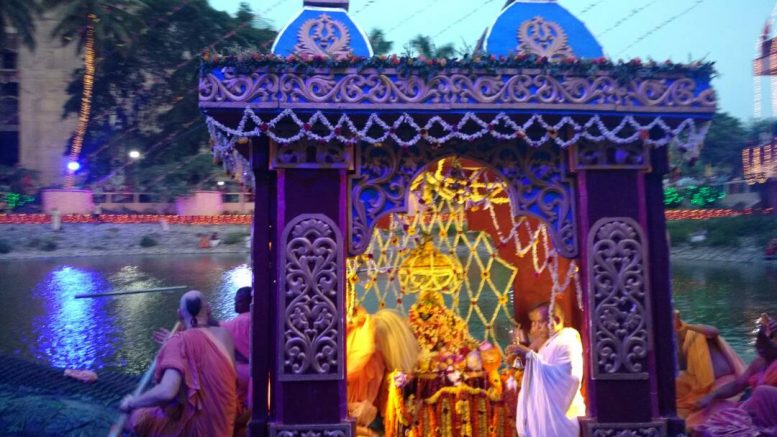 Mayapur, April 29: The holy Chandan Yatra festival has began at the Iskcon hub in Mayapur today with usual splendour in presence of over a few thousand devotees who gathered at the holy Chandradaya temple premise from across different parts of the the globe.

Chandan Yatra festival which will be organised during the next three weeks is arranged to provide relief to Lord Krishna from the scorching heat of the summer.

In Gaudiya Vaishnava philosophy, it is believed that around 700 years ago Lord Krishna while staying in Vrindavan Dham, had instructed his devotee Madhvendra Puri  to fetch “Malaya-Chandan” or sandalwood  from Odisha and to make its paste so that it could be smeared all over his body as a relief from soaring temperature. The cooling touch of the sandalwood provided a pleasant feeling to Sri Radhamadhaba and also helped him to get relief from heat.

With this belief, the devotees make sandal wood paste and smear it over the deity of Lord Krishna during these 21 days of the festival that begins on the third lunar day of the waxing moon of Vaisakha month.

A spokesperson of Iskcon said: “The smearing of the deity with sandal wood during this three weeks period is an act of rendering devotional services for the devotees”.

“Every day during this period large procession carrying the resplendent deities on a palanquin will be taken out within the premise where thousands of devotees will sing and dance ecstatically”, added the spokesperson.

“In the evening the deities will be placed on a nicely decorated boat and be taken out for a ride in the water body adjacent to the Chandradaya temple so that Lord Krishna can enjoy the evening breeze”, he added further.

A number of cultural programme will also be organised to mark the occasion, which will depict various pass times of Lord Krishna – Rasa Leela, Govardhan Leela, Aghasura Vad, Gajendra Uddhara and many. Prasadam of different delicacies will also be distributed among the devotees.