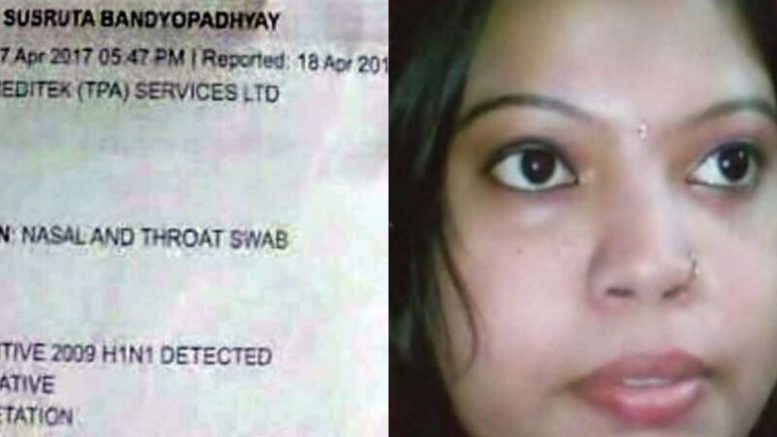 Krishnanagar, April 30: Death of two Nadia residents of swine flu on two consecutive days in a Kolkata based private hospital has created panic in the district with suspected spread of the virus. Several doctors appeared to be surprised knowing this unusual trend of spreading of the virus which generally thrives during the monsoon.

On Sunday Sima Ghosh (33), a homemaker from Kalyani died at AMRI hospital. Earlier on Saturday night Sohom Ghosh (4) died in the same hospital. Medical superintendent of the hospital Arnab Gangopadhaya said: “Both the patients were initially admitted with high fever and later diagnosed suffering from swine flu as H1N1 viruses were found in their blood samples”.

AMRI hospital sources said that both the patients were died of H1N1 influenza with severe respiratory problem and distress syndrome with cardio-respiratory failure.

Deceased homemaker’s husband Amitabha Ghosh said: “I admitted my wife initially to a nursing home in Kalyani on April 16. But as the doctors there suspected swine flu, I shifted her to AMRI on the next day”.

Chief medical officer of health, Nadia Tapas Roy has confirmed the death of the two from Nadia.

“I have heard that two patients have died in a Kolkata based hospital. A health department team has today visited the house and adjacent areas in Kalyani town where the deceased woman stayed. All necessary precautionary measures being taken to prevent spreading swine flu attack”.

Meanwhile, residents of Kalyani have blamed the local municipality authority for spreading of the disease free access of pigs in residential areas.

Sources said that several pigsties have mushroomed in the otherwise clean town Kalyani. “There are around 500 pigs roam freely in at least four wards of the town (3, 4, 14 and 19). The local municipal authority has no control over these pigsties due to political reasons. The pigs even have a free access inside the JNM Medical College and Hospital premise”.

Deceased homemaker Sima Ghosh was a resident of Ward 14 where some pigsties are also available.

Kalyani Municipality chairman Sushil Talukdar said: “The Municipality will ensure cleanliness in the civic areas and drive out the pigs from the civic and residential areas. I have told the Sanitary Inspector to send the pigs to the government farm in Haringhata”.

Deceased woman’s husband Amitabha Ghosh also alleged the free access of the pigs in the town as main reason behind spreading of the virus. “I don’t know how the virus had spread. But, it really looks odd to see pigs in a town like Kalyani where All India Institute of Medical Science (AIIMS) is being built”