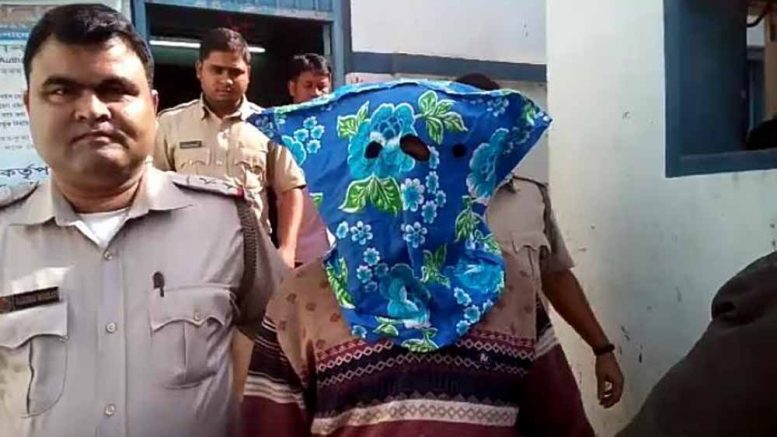 Abhijit Pundari being taken to ACJM court in Ranaghat

Ranaghat, Feb. 19: Abhijit Pundari, suspected killer of Krishnaganj’s Trinamul MLA Satyajit Biswas, on Tuesday claimed that he has been falsely implicated by police in the murder case due to political reasons. He said this inside additional chief judicial magistrate’s court in Ranaghat where he was produced by a CID team which arrested him from West Midnapur’s Radhamohanpur on Monday.

The court ordered two weeks police custody for him as prayed by the CID.

Meanwhile, considering the importance of the case CID has constituted a three-member ’special investigation team’s (SIT), which will be headed by an officer of DSP rank.

MLA Satyajit Biswas was killed, while watching a cultural programme close to his home in Phulbari village of Hanshkhali on February 9 night.

Eye witnesses told police that it was Abhijit who had allegedly fired at Satyajit Biswas from close range and fled. Abhijit, a Trinamul activist was named in the FIR by eyewitness of the murder and slain MLA’s close aide Milan Saha along. He also named four others in the FIR including BJP leader Mukul Roy, who was accused for conspiracy.  The sleuths had earlier arrested suspected co-accused Sujit Mandal, Mithun Mandal, Kalidas Mandal. They also arrested BJP leader Nirmal Ghosh. But, Abhijit remained elusive until Monday morning.

On Tuesday a CID team produced Abhijit before the court early in the morning. During the submission of the police, Abhijit tried to draw ACJM Sanghamitra Poddar’s attention and said, “I have been implicated in this murder case due to political reason only”.

APP Sumit Mandal, however, refuted Abhijit’s claim. Mandal said, “Abhijit has already confessed to the investigating team that he was involved with the murder. He also told about others who were involved behind the crime. We gave proof of his statement. He further told police that if given chance he would help police to trace out arms and to nab other persons who were involved in the conspiracy behind the murder”.