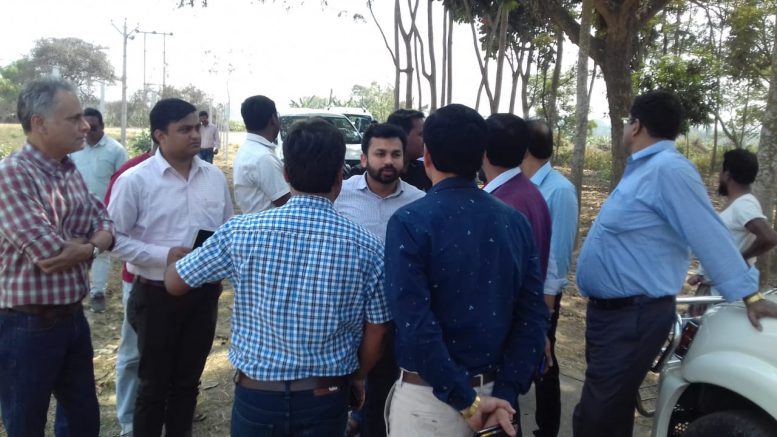 Flipkart officials at the project land in Haringhata on Tuesday

Haringhata, Feb. 19: A four member team of eCommerce giant Flipkart has urged the Nadia administration to clear all sorts of encroachments and agricultural works from the 100-acre land in Birahi area of Haringhata which the state government has allotted them for setting up a its proposed logistic hub.

The Flipkart team visited the identified land on Tuesday and requested the district administration to ensure a clear land by the end of February so that they could begin project works by the first week of March.

The Flipkart team led by senior Director Arun Kher visited the land spread over Ainshpur, Panchpota, Balindi village of Birahi-1 gram panchayat, was apparently not happy enough witnessing agriculture works, huts and some commercial stall set up by a section of the villagers. An officer of Nadia administration said, “The land allotted to the company is well protected. But, some villagers have grown vegetables there. We have instructed them to clear the land immediately so that the company could begin works there. We have also told the owners of huts and shops to remove them immediately”.

But, this has angered the local farmers who urged to allow them time at least one more month. “We have planted vegetables which will hardly take one month to be matured. So we requested the officials to allow us this time so that our hard labor and money do not go in vain. But, the administration refused to listen”, a farmer said.

Trinamul leader and Nadia zilla parishad member Chanchal Debnath, who accompanied the team today along with SDO Kalyani said, “We have talked to the villagers and hopefully that they would clear the land soon. We will see if they could be paid compensation’.

SDO Kalyani Unis Rishin Ismail said, “We will extend all cooperation to the company”.

An official of Flipkart said, “We have begin providing fencing work to the identified land even though there is encroachment. We would try to begin project work from March if clear land is made available”. Flipkart would try to complete the logistic hub hopefully by the beginning of 2021, through one of its subsidiary Instakart Services Private Limited.

The Haringhata hub will be the second such hub of the company after Bangalore, which would be developed to provide service to the market in the entire eastern region. The identified land of the project is around 40km away from city airport and well connected with NH12 as well as Kalyani Expressway. The proposed project is expected to provide direct employment to over 18000 people”, a state government official said.