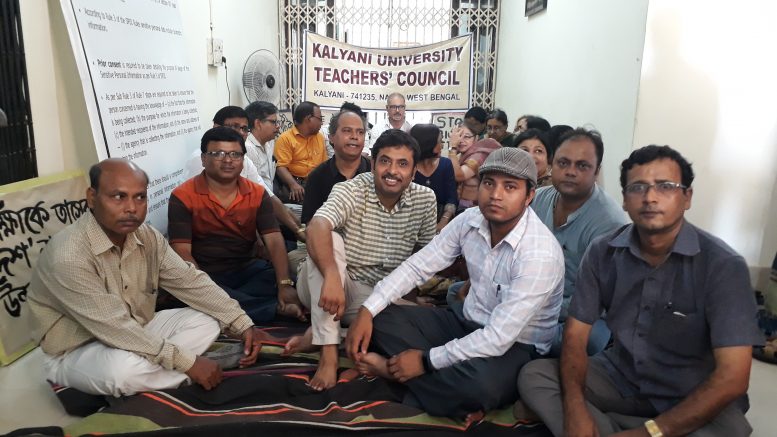 Teachers demonstrate in front of VC's Office in Kalyani University

Kalyani, Sept. 17: Classes were hampered in Kalyani University on Tuesday since a section of the teachers had observed cease work as a mark of their protest against the biometric attendance system implemented by the University authority in last week.

The Teachers have decided to continue boycotting their class hampering study for the remaining period of the week to intensify their demand for withdrawal of the biometric attendance system, which they termed as ‘authoritarian attempt to curb the academic freedom of the teachers’.

The teachers who staged demonstration in front of the vice chancellor’s office in the administrative building led by Kalyani University’s Teachers’ Council (KUTC) have also demanded deletion of their biometric data from the attendance system as they alleged that the University authorities had used it keeping them in dark about its actual purpose and eventually used it for the attendance system.

The biometric attendance system came into effect in all the departments of the Kalyani University from September 12 this year.

Professor Tarak Das Basu, President of Kalyani University Teachers’ Council said, “There University authority asked us to provide our biometric data. But, it never said that the data would be used for the biometric system. We were totally kept in dark about the actual purpose and implemented the attendance system arbitrarily without the approval of the state government”.

“We are sorry for the continued cease work. But, it is the University authority which literally forced us to take such a drastic step against the biometric system which cannot bring academic excellence to the institution”, Professor Das Basu added further. The aggrieved teachers led by the Teachers’ Council launched the agitation on September 5 organizing protest rallies and sit-in demonstration. However, from Tuesday they began to cease work in an attempt to intensify their demand for withdrawal of the new attendance system.

The issue, however, created a division among the teachers as a major section of the 188 teachers did not attend the demonstration even though they escaped classes being under ‘pressure’ by some members of the Teachers’ Council. Only 108 teachers had attended demonstration on Tuesday formally to register their protest. Moreover, many members of the council did not personally approve the decision of fresh class boycott from Wednesday.

“As a teacher, I don’t think this is the ideal way to protest. The agitation could easily be continued without boycotting classes as this would make the students the ultimate victims”, a teacher who participated in the agitation, but opposed fresh class boycott call, said on anonymity.

Nevertheless, a section of Teachers’ Council members who remained adamant and advocated for the continued cease work, said that the students will be amply “compensated”. “We will compensate the loss of classes which the students would incur by taking extra classes”, said KUTC president Professor Tarak Das Basu.

Vice-Chancellor Sankar Kumar Ghosh said, “The decision of the teachers to continue class boycott is quite unfortunate”. “Implementation of a biometric attendance system was not my personal agenda. It was done only after the Executive Council given its nod. I have no prejudice against teachers. I will appraise the EC members about the grievance of the teachers. They will take the decision on the issue”, Vice-Chancellor said.

Earlier in 2018, in the 7th meeting of the West Bengal State Council of Higher Education Council that held in Calcutta a resolution for installing biometric attendance system in universities were adopted in presence of all the Vice-chancellors in the state. After the resolution of the higher education council, the Executive Council of the University had given its concurrence for implementation of the biometric attendance system