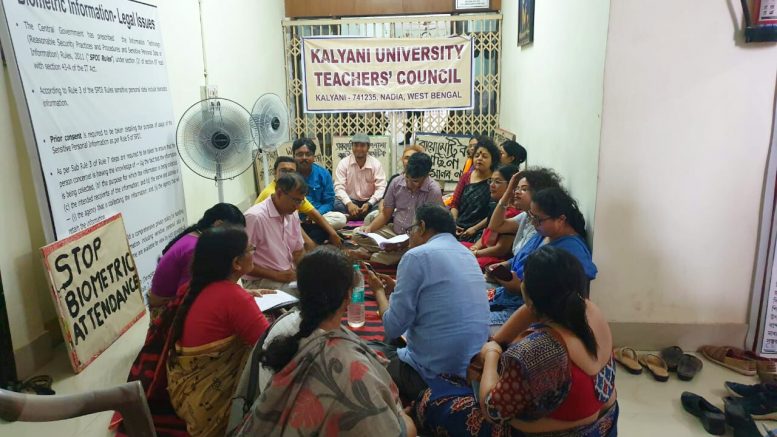 Kalyani, Sept. 20: Teahers of Kalyani University who were protesting implementation of the biometric system have called off class boycott on Friday and announced to resume normal academic activities for sake of the students from Monday. Vice Chancellor Professor Sankar Kumar Ghosh meanwhile told teachers that the new attendance system will remain ‘optional’ leaving it to the discretion of the teachers until the Executive Council of the University takes a final decision in the wake of the protest by the teacher against its implementation.

However, at least 18 teachers have submitted resignation on Friday evening being the head of the departments as they felt ‘hurt’ for Vice Chancellor Professor Sankar Ghosh’s ‘unceremonious’ exit from the meeting with them which he himself had convened to hear their grievance.

Moreover, at least 60 other teachers have also submitted their resignations being the members of different internal administrative and academic committees of the University for the same reason as well as protesting the implementation of biometric attendance system.

The teachers, who felt ‘humiliated’ due to the authoritarian attitude of the University authorities, have submitted their resignation to Registrar Debanshu Roy. The university has 33 departments and over 100 internal committees. Resignation of the teachers would make serious impact on the daily academic and administrative functioning in the coming days, an officer of the University said. These committees are on purchase, students’ welfare, research, hostel and on many others subjects.

Kalyani University Teachers’ Council president Professor Tarak Das Basu said, “We have decided to resume classes from Monday. But at the same time we will continue our protest against the biometric attendance system until the university authorities announced its rollback”.

“Many teachers meanwhile have resigned being the head of departments and from different committees as they felt hurt and humiliated due to Vice Chancellor’s unexpected behavior. More teachers have meanwhile expressed their desire to leave their posts being upset about the VC’s approach towards the grievance”, Professor Das Basu added further. A large section of teachers of Kalyani University began protest demonstration against biometric system attendance from September 5. They later began boycotting classes from September 17 which continued for three days. But, on Friday responding to a demand of the teachers the VC Professor Sankar Kumar Ghosh had called a meeting with teachers “exclusively” to discuss the biometric issue.

In the meeting the teachers had expressed their grievance. On behalf of the teachers Professor Tarak Das Basu, Professor Alok Ghosh explained the legal aspects when the Vice Chancellor had also clarified his points. In his speech the VC announced that registering attendance through the new system would remain ‘optional’ until the Executive Council take a call on the issue in the wake of the agitation by the teacher. He told the teachers, “If you don’t like to register your attendance in the biometric system, you can avoid it, but kindly never discourage or prevent others to register their attendance”.

But, trouble began in the meeting when a senior professor of commerce department raised some issues beyond the exclusive single point agenda. A teacher who was present at the meeting said, “At this point the VC became visibly angry and took an unceremonious exit apparently leaving the meeting in an inconclusive state”. KUTC President Professor Tarak Das Basu said, “It was the VC who called the meeting, but he unfortunately left the auditorium without any formal announcement. It was quite humiliating for the teachers”.

When contacted over telephone, Vice Chancellor Professor Ghosh said, “I was compelled to quit the meeting since a teacher ignoring the agenda had raised some issues. The meeting was called exclusively to discuss the biometric attendance and the grievance of the teachers. The issue was amply discussed by the teachers and I announced registering attendance in the new system ‘optional’ respecting their grievance. So there was nothing to announce more and nothing remained inconclusive. I left only when the other issues were raised for which I did not have time”.

“The biometric system was introduced as per the decision of University’s Executive Council. It was not my personal decision, rather I have just implemented as per their recommendation. I will appraise the EC for further decision on the matter so that the teachers do not misunderstand me”, VC Professor Ghosh added.

Earlier on Friday, a large section of the Non Teaching staff organized a rally expressing solidarity to the movement of the teachers on the biometric attendance.