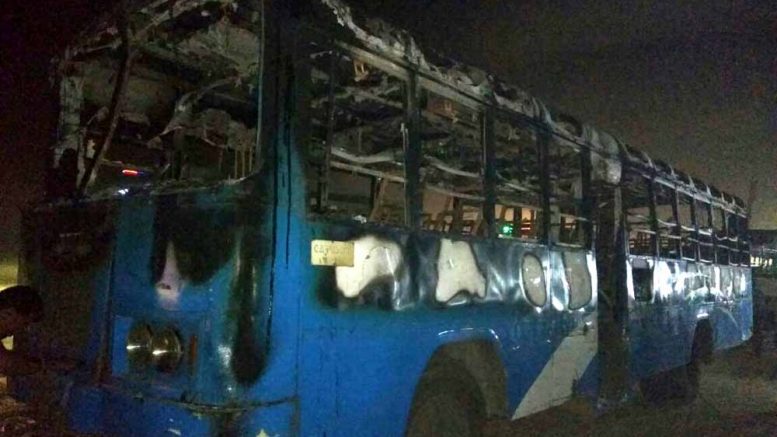 a state bus torched by mob in Debagram

Debagram, March 20: A sub inspector of Murshidabad police today fired at a lorry laden with sand after its driver refused to pay him Rupees 500 as demanded by him. The officer in a jeep chased the lorry for over 5km when it was trying to flee and fired on its rear wheels entering Nadia. The driver of the lorry lost control and the vehicle overturned on the road. The driver and the cleaner were injured in the incident. The incident prompted the locals to turn violent as they put a blockade and torched at least four buses, ransacked a police vehicle and attacked cops at the Debagram outpost suspending traffic movement on NH34 over about five hours since afternoon. The situation brought under control at about 7pm when police teams from Nadia and Murshidabad started lathi charge and disperses the mob.

Sources said, sub inspector of Rejinagar police Bijan Das fired at the lorry after the driver paid Rupees fifty only instead of Rupees five hundred demanded by Sub inspector Das.

The accused SI meanwhile went missing since the mob outrage. Senior police officials of Murshidabad police refused to speak about the allegation against Das.