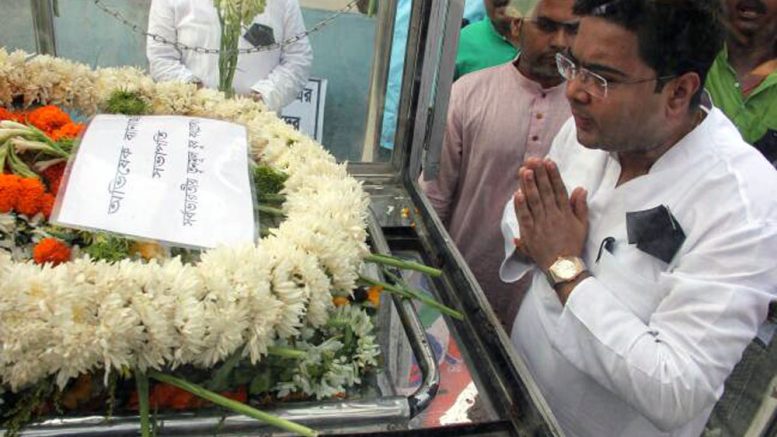 NfN NETWORK
Bogula, April 17: Murder of Nadia’s Trinamul Panchayat pradhan Dulal Biswas’s Murder appeared to be a fall out internal rivalry of two erring factions of the party. Party top brass is also not ruling out that this popular leader with several criminal backgrounds was killed through a well hatched conspiracy by a section of the party that exploited his personal rivalry to eliminate him.

Police have so far detained two persons for interrogation in connection with the murder. Sources said, both the detained persons are known Trinamul activists. However, the sleuths yet to get any breakthrough as told by additional SP (HQ) Dinesh Kumar.

Trinamul General Secretary  Partha Chatterjee today rushed to Bogula along with Abhishek Bandopadhyay to control the brewing tension among the local leadership in Bogula town that categorically think that without support of a section of party this murder could never be possible inside a party office that is located on a busy road and amidst over a dozen of party men present inside the office.

On Sunday evening Biswas was shot dead inside party office in Bogula town located on Krisnanagar -Bogula road by a gang of unidentified miscreants. His son Dipankar had tried to resist the attack but failed as he was beaten up by the miscreants before they shot him dead.

Both Abhishek Barrier and Partha Chatterjee blamed BJP for the murder, but at the same time did not take any ground reports from the district leadership.

“He has been directly in touch with police and not at all depending on local leaders as he is convinced that the leaders have different versions as per own interest’, a Trinamul leader said.

Both Partha and Abhishek refused to address the gathering and returned paying floral tribute e to Biswas and speaking to his family members.

Party sources claimed that role of two Party MLAs and a zilla Parishad member is under scanner as internal bickering with them recently took an ugly turn.

A Trinamul leader in Bogula said: “Dulal recently earned the wrath of a section of some leader’s and party activists as he stopped extortion of money from the beneficiaries of state sponsored  rural housing scheme. Dulal was always with the poor and never allowed extorting money from poor beneficiaries. He also told the contractors to maintain quality of construction and warned some of them for poor works. These contractors and activists have backing of some leaders of a different section, who never liked Dulal’s growing popularity in the area being a late entrant to party from CPM. Role of these party leaders and contractors are suspicious as they could also utilize Kartick and his gang with whom Dulal had long term personal rivalry”.

The sleuth meanwhile surprised as the miscreants got access to information of absence of Dulal’s body guard who took leave for two days.

“This is quite suspicious as only some local party leaders knew it”, a party activist said.

A family friend of Biswas did not rule out the internal hand into the murder. He said: “I do not know the exact reason, but Dulal was very anxious about the role of some leaders who were creating hindrances before development works. He also was very anxious about own security since Kartick Biswas, accused in murder of Dulal’s brother Season returned to area”.

A villager said: “Kartick is notorious criminal once associated with Congress. He was out on bail and recently started hobnobbing with some Trinamul leaders”.

In 2005 Biswas’s elder brother Swapan was killed allegedly by Some Congress activists which include Kartick. Except Kartick, most of the 11 accused later joined Trinamul and got party post. Dulal also later left CPM and joined Trinamul in 2012. But, Kartick remained a close associate to those former Congress colleagues.

Dulal’s daughter Dipika said: “Kartick has vowed to eliminate our family. He killed my uncle earlier. Now he has killed my father. He recently had also attacked my father and had also threatened to kill me and my brothers. I do not who are associated with him, but the way my father was killed raise lot of questions in my mind”