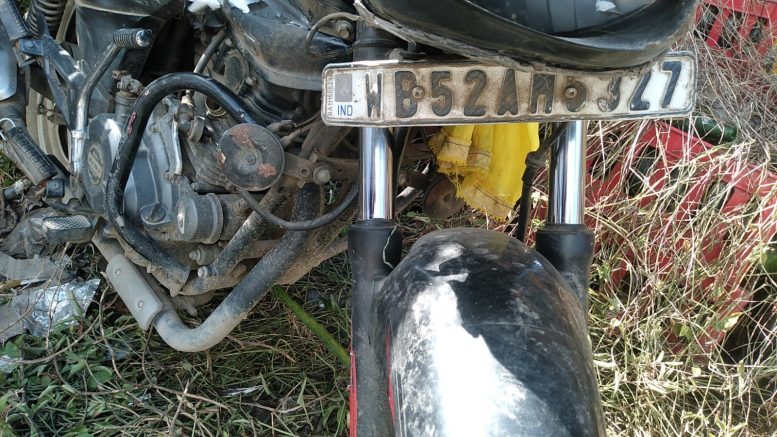 Mangled remains of the motorcycle which the couple was riding. Picture by Ashis Pramanik

Karimpur, Oct. 08: A young couple riding a motorcycle along with their three-year son was killed as they suffered fatal head injuries due to hitting a roadside tree while trying to avert a head-on collision with a lorry that was desperately trying to overtake another one on Krishnnaangar-Karimpur state highway on Saturday morning.

The bizarre incident occurred at about 10.30 am near a fuel station in the Nazirpur area of the road stretch. The couple was going to visit a doctor in Nazirpur for their son when the accident occurred.

Police said, Kamal Mondal, 28, a resident of Goas, and his wife Mousumi Biwi, 24, died on the spot while their son Anish suffered multiple injuries and was admitted to Nadia district hospital in Krishnagar.

According to an eyewitness, deceased motorcyclist, Kamal Mondal was riding on his track on way to Krishnagar. “But a lorry from the opposite direction suddenly came in front of him while trying to overtake another lorry in the same direction. There was little space to allow…so Kamal in a desperate attempt to avert the head-on collision with the speeding truck tried to ride towards to edge of the road but ended up hitting a big tree”, Swapan Saha, a local resident who witnessed the accident said.

“The couple had no helmet on their heads and they died on the spot due to the heavy impact of the collision with the tree”, Saha added.

Local residents rescued the couple and their son and took them to Nazirpur primary health centre, where the couple was declared dead. Their son was soon transferred to Tehatta subdivision hospital but against transferred to Krishnagar for his deteriorating condition.

Akkas Mondal, father of the deceased motorcyclist said, “My son left home along with my daughter-in-law and grandson at about 9.30 am to visit a doctor in Nazirpur. At about 11 am police informed me that they met with an accident…I reached the hospital and learned that reckless driving claimed the lives of my son and his wife”.

The incident once again raised finger at the police for lack of monitoring over reckless driving by a section of the motorist on the Krishnanagar-Karimpur state highway.

“There is absolutely no mechanism by the police to control the errant drivers. During the past six months at least two dozen people were killed on the Krishnnagar-Karimpur road due to rough driving by errant drivers. Nevertheless, the police remained apathetic to act. Even the state government much talked about the endeavor of safe drive-save live initiative and forcing the motorcyclist to use helmets have collapsed in Nadia”, said a local resident in Nazirpur.

An official of Krishnanagar police district, however, claimed regular monitoring of errant drivers. “There is regular scanning to identify reckless drivers. They are also penalized. At the same time, we always urge people to use helmets while riding motorcycles. But, unless people become conscious of the danger of riding without a helmet, nothing can be changed