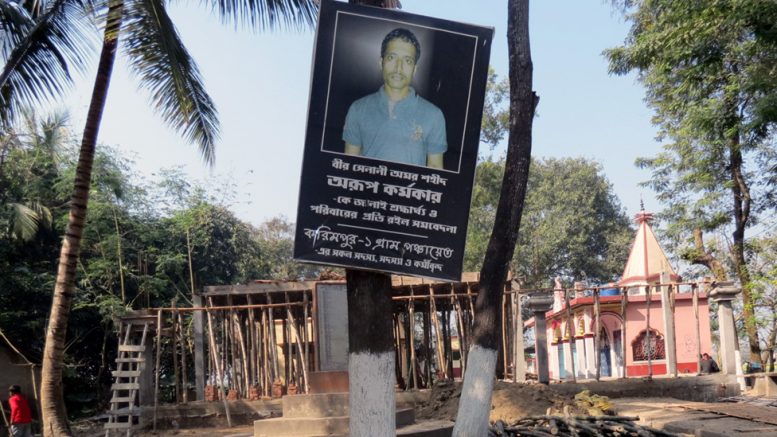 The rest house under construction at Ananda Peeth burning ghat in Karimpur. Picture by Ashis Pramanik

Karimpur, Jan. 8: Parents of a martyred Central Reserve Police Force (CRPF) jawan from Karimpur have started building a rest house at a burning ghat in Karimpur town using a part of the financial aid they received as compensation from the government after their son  died in Maoist attack last year.

Asit Karmakar (60) and Chandana Karmakar (55), parents of CRPF jawan Arup Karmakar of Abhoypur, who was killed in last year in Chattisgarh’s Sukma in Maoists firing, have made a preliminary estimate to spend Rupees at least 10-lakhs to build the 2500 square foot rest house at the burning ghat.

The building is being built in memory Arup at the Ananda Peeth ghat in the town.

The construction work has already been started on a 3-cottah land donated by the Karimpur-II gram panchayat authorities. The couple has decided to open the rest for public use during April this year.

“Our objective is to keep our son live in the memory of the people in Karimpur for ever”, said Arup’s father Asit Karmakar, who earlier run a vegetable shop.

On April 24, CRPF constable Arup Karmakar (24) then attached to 74-battalion was killed during indiscriminate firing by Maoist rebels along with 24 other jawans in Sukma district of Chattisgarh. As a mark of tribute the Ananda Peeth funeral ghat committee has decided to set up a fibre glass made bust of the demised jawan spending Rupees 1-lakh in front of the rest room.

“We have received good amount of financial assistance after death of my son. The death cannot be compensated with money. However, it came as a great help to run the family, particularly for ailing old couple like us. We found the money is more than enough for us. So we decided to use at least a part of it for sake of society in memory Arup. So we requested the local panchayat to give us a piece of land so that we could build a rest house at the funeral ghat. People face problems in summer and monsoon while performing the last rites at the ghat. So we wanted the land. The panchayat granted our plea”, said Asit Karmakar.

The couple now lives in a small house with their unemployed elder son Animesh. CRPF authorities offered a job of constable for him, but the couple refused it.

“We do not want to lose another son. There was no one else to see us. So we humbly said no to the job offer”, said Arup’s mother Chandana.

As per present compensation norms, the family of a slain soldier of Central Armed Police Forces and other para-military forces gets about Rupees 50-60 lakh. Home minister Rajnath Singh has recently stated that the Government is contemplating to make it Rupees one crore enhancing the limit.

Ramen Ghosh, deputy chief of Karimpur-II panchayat said: “We agreed to donate the land as it is meant for a great cause and in memory of a brave son of our area”.

Rakesh Mistry, a member of Ananda Peeth burning ghat committee, who would set up Arup’s bust, said: “Arup was very helpful person. It is a tribute to him on behalf of people in Karimpur”.