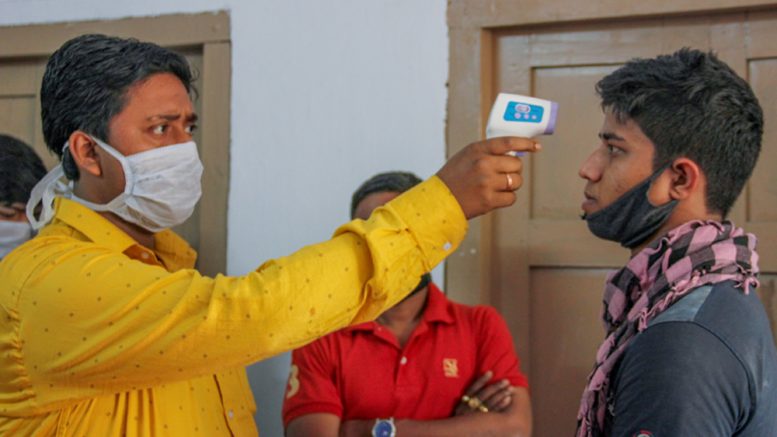 A youth being examined at Santipur hospital

Krishnanagar, March 23: The Nadia administration has begun community surveillance at the local levels to ensure that people with suspected Covid 19 threats are forced to be isolated at home. The objective of the initiative is to involve the local people so that they could persuade any errant persons flouting quarantine norms and if required take police help to put them under isolation.

In this endeavor, the district administration has planned to include political and social organizations as well as individuals in this endeavor so as to ensure strict adherence to the home isolation norms which is a very important aspect to stop possible transmission of the deadly disease.

His concern is quite established by the fact that confirmed cases of Covid 19 crossed 400 on Monday.

Bengal chief minister Mamata Banerjee also same concern and on Saturday evening advised the district administrations to take stern steps against those who are not obeying the home isolation protocol. Prime Minister also advised the state governments for taking legal steps against such an irresponsible person.

Taking note of the situation, the Nadia administration, which has a huge number of migrant laborers returning home Covid 19 affected states,  has begun community surveillance in addition to obtaining an undertaking as prescribed by the state government from such suspected patients.

The undertaking makes one liable for legal action under West Bengal Epidemic Diseases, Covid 19 Registration 2020 unless he obeys the home isolation norms. The punishment under the regulation is six month’s jail term.

Nadia district magistrate Vibhu Goel said, “The home isolation has become a matter of concern in certain cases as we have been receiving complaints that vulnerable people are not complying with the instructions of the medical team. In such cases, we have started involving the local community to persuade the persons. If such persons turn errant, the local people should report the administration for legal step”.

“We are hopeful that people will realize that such isolation is not just important for him rather to save his near and dear ones. So we have begun awareness using public address systems in several areas and involving social and political organization”, the DM added.

As per the management protocol the health workers in panchayat and municipality level monitoring presence of any person with suspected symptoms of coronavirus arrival in their locality in association with local people. They inform the task force after identifying such persons who took them to the hospital for screening and if required send to home isolation for two weeks. But in many cases, such people have been violating the instructions.

‘Community surveillance is needed at this stage. It is not just possible for health workers to keep watch on them, rather their neighbors, local club, organization, political parties should come up to ensure the prescribed home isolation to avoid any possibility of community outbreak. The local people should persuade them and put pressure too if required and if failed to get any cooperation should inform the police as well as the district administration for the legal action”, Goel added.

The Nadia administration, meanwhile, identified 34 schools across the district to develop those as isolation centre to accommodate patients in case the number of suspected affected persons increased alarmingly.