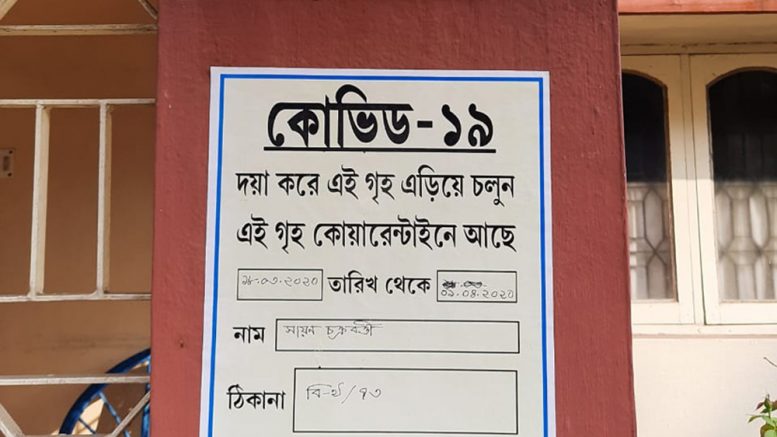 Krishnagar, March 27: The Nadia administration in an attempt to ensure stringent home isolation of the suspected carriers of the coronavirus, has started slapping posters on their residences advising people to avoid visiting them to prevent any possible transmission of the disease.

Senior officials in the district administration said that the initiative has been taken under its ‘community surveillance’ endeavor so that people become conscious and come up to avoid any possible community outbreak of the disease.

However, in most of the cases, house-owners were seen removing such posters jeopardizing the objective behind it claiming the initiative as ‘humiliating’ one. The district administration, however, is not eager to take any action for such removal to avoid any controversy.

The district administration formatted the poster which is being slapped by the quick response teams (QRT) on residences of the persons under quarantine.

The poster containing the advisory states, “Daya korey ei griha eriya cholun, ei griho quarantine e achey” (Kindly avoid this house. This is under quarantine) mentioning the name and address of the person along with the duration of the quarantine period.

A section of the social workers, however, alleged that such posters can stigmatize the family of the suspected patient as well as could make them socially ostracised. In many cases, the quick response team (QRT) of the district’s Covid 19 management cell,  has faced resistance from the family members of the suspected carriers of the virus. Infact, they removed it as soon as the QRT left.

A person under quarantine in Kalyani said, “This poster is quite humiliating. We have removed it to avoid embarrassment”.

Insiders at the district administration said that the initiative to slap posters has been taken only after a large section of the suspected persons’, advised quarantine have been roaming freely creating huge risks of community outbreak. The issue became a matter of concern to both centre and state as this section of people taking quarantine lightly making the other vulnerable.

“We know that such controversy may arise. But, we don’t have any better options. Our objective is not to ostracise anybody, rather to make the community aware of the deadly outcome. If anybody feels that such a poster is embarrassing or ostracising him, he can remove it” – Vibhu Goel, IAS, DM-Nadia

Sources said that the Nadia administration decided to use posters apparently following the way the Delhi Government and many other district authorities across the country have done it.

Speaking to the NfN Nadia District Magistrate Vibhu Goel said, “We know that such controversy may arise. But, we don’t have any better options. We have learned that many district authorities in the country have been compelled to take such a step. Our objective is not to ostracise anybody, rather to make the community aware of the deadly outcome”.

“If anybody feels that such a poster is embarrassing or ostracising him, he can remove it”, the Nadia DM said adding that despite the best effort people are yet to realize the magnitude of the threat of the deadly disease.

An officer of Covid management cell said, “The quarantine period has been mentioned so that people can understand that after the expiry of the period he is not needed to be quarantined unless no symptoms surfaced up”

“As of now, the country has been fighting. We are trying best to keep people came from outside inside their homes. But we cannot monitor thousands of such people and monitor each of their activities. So this is an option for community involvement”, the Nadia DM added further.

“For the last three days, we have been discussing the problem. The proposal of the poster was also debated for during the past few days and eventually, we decided to implement it in a persuasive manner. However, if any family needs any support to maintain prescribed distance ensuring that they are not ostracised. We have sensitized all concerned officials at panchayat and municipality level and advised them to ensure the balance” he added.

“The QRT team has been persuading people to ensure isolation in a humble manner appealing that their mixing in the society could lead to great threats. We have been telling people to realize the need for their isolation. But, we don’t have a huge staff to monitor such people and unfortunately, many such people exploiting the situation” he added.