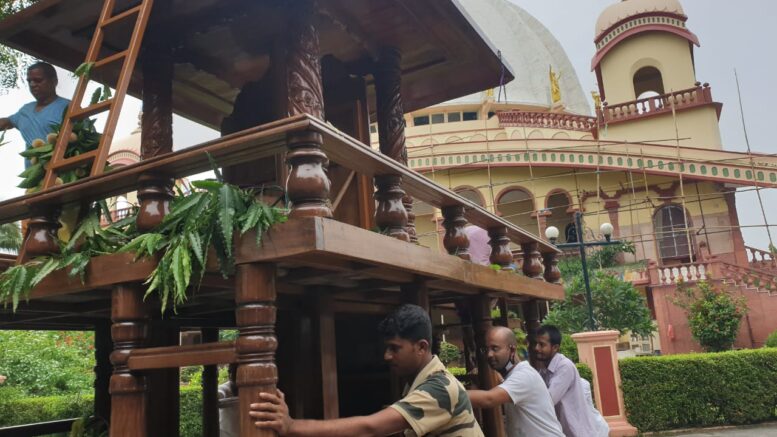 Chariot under preparation at Iskcon premise in Mayapur (file picture)

Kolkata/Mayapur, July 11: The Iskcon authorities at its headquarters in Nadia’s Mayapur have planned to scale down this year’s Rath Yatra festival, scheduled for July 12, making it an in-house affair barring entry to outsiders due to Covid restrictions.

There will be no traditional Yatra this year. The deity of Jagannath which used to travel 6 km from Rajapur village to reach the ‘Gundicha temple’ in Mayapur, will travel inside the Iskcon premise with only 50 pujaris.

In compliance with the Covid protocols, the premise will however, be kept locked for the entire day of the festival so that no visitors can enter.

“The movement of the chariot of Lord Jagannath will only be restricted inside the Mayapur temple premise and no visitors will be allowed to participate”, said Iskcon Mayapur’s head of media communications Subroto Dasa. Iskcon Mayapur sources said that only one chariot, instead of customary three, will move barely around 200 meter inside the premises from Gada Bhawan to the gate of Panchatatva temple with the deities.

In a similar way, the Iskcon authorities have minimized the festival’s 50th anniversary in Kolkata owing to the Covid restrictions. However, unlike the in-house arrangement being made in Mayapur, the organization’s Kolkata chapter will organize a low key ‘Yatra’ of the deities with the help of city police.

On Monday a pilot car of Kolkata police will escort the deity to Iskcon house at 22-Gurusaday Road from the temple located at 3C-Albert Road. An Iskcon Kolkata official said, “The pilot cars of Kolkata Police will take the deities to the destination”.

However, the Iskcon’s Kolkata authority refused to divulge the travel route to avoid gathering of the public. “We are willfully not disclosing the route which the police team would use. This is only to avoid any gathering of the devotees alongside the road which will be harmful considering the Covid situation”.

Iskcon authorities would, however, miss Chief Minister Mamata Banerjee this time as she will not inaugurate the festival like previous years due to Covid situation. However, she will send bhog which will be offered before Lord Jagannath on her behalf earlier in the afternoon”.

“Owing to Covid situation no visitors will be allowed. We had a grand plan to celebrate the 50th anniversary. But, the situation has compelled us to arrange the festival in such a way. We appeal to all to watch the festival virtually on our YouTube or Facebook page while staying at home”, an Iskcon Kolkata official added.

“This low-key yatra has been arranged only to offer the deities a ride as they are confined at their abode for the last two years. This is a small exception we have made while maintaining strict restrictions and almost minimizing our grand celebration plans”, a spokesperson added.

On last Thursday Supreme Court accorded its consent to take out Rathyatra only in a limited radius zone in Puri, but banned the festival in the entire state of Odisha in the wake of a surge in Covid positive cases.