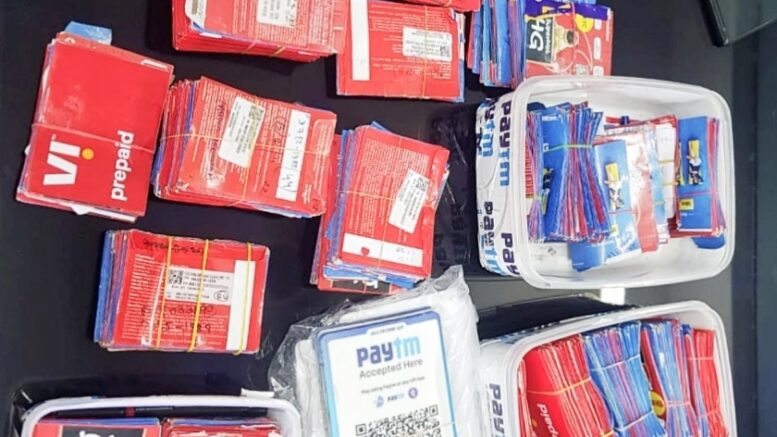 A part of the seized sim cards and ePayment barcodes

Karimpur, June 27: Police have arrested three youths and recovered around eight hundred sim cards as well several PayTM barcodes over their suspected involvement in an China linked online gambling racket and banking deception syndicate which they were allegedly operating from a rented building in Nadia’s Karimpur.

Acting on a tip off by local residents suspicious about trios activities in an apparent confinement, a police team conducted a raid at the residential building located in Panchgachi-Baganpara area of the town and arrested the trio during the early hours of Sunday morning.

During preliminary interrogation the trio has confessed that they used to dupe people to join the gambling racket and siphoned money that has been remitted to phone based payment gateways like PayTM.

At the same time they also confessed to cheating innocent people posing as bank officials obtaining their debit or credit card numbers and their card verification value (CVV) codes.

The accused trio, identified as Mujubur Sheikh, Ramen Karmakar and Manabendra Sarkar – the houseowner, were produced before the additional chief judicial magistrate’s court in Tehatta, who ordered five days police custody for them.

Police said the trio, aged in their early 30s, have been primarily charged for deception and forgery. However, officials of the cyber crime wing of the Krishnagar district police have been invited to interrogate them to unearth the root of the racket.

Additional superintendent of police (Rural) Krishanu Roy said, “It would be too early to comment on their involvement. But it appears that the trio has a deep rooted link. At least the huge quantities of the sim cards and PayTM barcodes indicate so. We have taken them to remand and begin interrogation to track their network”.

Police sources said that during the preliminary investigations the trio confessed their link to Chinese-operated online gambling associates. This confession alerted the sleuths to involve the cyber crime wing for detailed investigation.

“It could not be immediately ascertained who are their victims. But since we noticed several cases have been registered for online illegal gambling with chinese links across the country in the recent past, we took the matter seriously”, a sleuth said.

A police official expert in cyber crime investigation said, “Generally online gambling is done by creating secure groups in WhatsApp or in Telegram. The admins usually refer to the websites on which group members can play games and place their bets. To skip the surveillance of Indian authorities, the domains of these sites are generally located in China and payments are routed through India based payment gateways like PayTM. The benefit remittances are usually transferred to several linked bank accounts to avoid the scanners of income tax”.

An officer of Karimpur police said, “We are trying to find out the amount of money they have siphoned so far and the associated bank accounts where the remittance has been deposited”.  At the same time the source of the sim cards as well as the PayTM barcodes and how they procured it in such huge numbers are also being investigated, the police officer added.