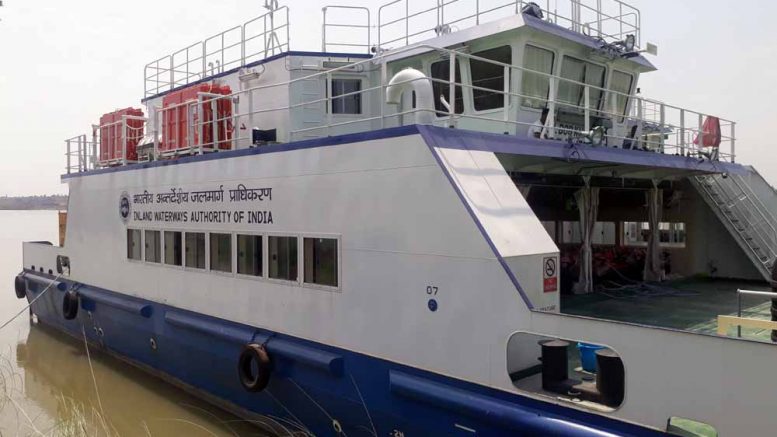 One of the vessels stranded at Guptipara Ghat

Santipur, April 10: 36 crew of a private vessel management company were denied to land at the Guptipara ghat in Santipur since the local villagers have forced them to remain confined on board on the Hooghly river without food and water for past nine days fearing that they could spread coronavirus.

The crew, attached to Libra International Shipping Limited, hired by the Inland Waterways Authority of India to bring four of their vessels from a Cochin to Guptipara ghat terminal, could not so far handover them since they failed to turn up due to the nationwide lockdown. The crew members who anchored at the Guptipara on April 2, are in deep trouble since the local villagers denied them exit even though they are food stocks running out.

The IWWI authorities which have a terminal in Guptipara had advised its security guard to arrange food for the crew. But, the man, a locally outsourced person could not help them either as the residents of Sutragarh Char and adjacent villages had stopped him supplying foods and threatening with dire consequences if he dares to visit the ship to supply food.

Informed by the villagers about the arrival of the ‘ships’ from outside, a police team met the crew two days ago, who too advised them to keep themselves confined inside the ships, but could not help with the daily needs of the 36 crew.

Captain of one of the ships Captain N. Satyanarayan Prasad told NfN, “The IWWI hired our service. We landed in Guptipara on April 2. We humbly sought permission to allow at least one person from each ship so that we can buy out needs like food and water from the local market in Santipur. But, the police authorities did not allow us, while we are almost running out of food and water”.

“Our stock of water has been finished and we have been drinking the river water finding no way”, the captain added.

Security guard Ratan Saha, said, “I could only supply them 20 water bottles each of 20 liters, 2 sacks of rice, one sack of potato, edible oil, which could only manage their needs for about a week. But, knowing this the local residents threatened me of dire consequences if I once again dare to visit the ships and supply foods”.

“As a result, I could not offer any more help to them… The villages are making surveillance in the area and even told the local shop owners not to sell anything to the crew of the ships as they are afraid of transmission of coronavirus as they came from outside”, Saha added.

“We were medically examined once we reached Kolkata port. None of us has any suspected symptoms of Covid 19. We have also medical certificates issued by the doctor in Kolkata. We have shown it to the police and some local people, but all appeared to be suspicious of us” – Captain N.S.Prasad

“Now since struggling without food and water, we appealed to the local police and villagers to allow at least one of us to visit the market to procure daily needs. But, none has so far allowed us to do visit the market’, the captain added.

A villager said, “We cannot allow the crew who are mostly from outside state to mingle up here freely in the market. We at the same time cannot allow anyone of us from our village to visit them. We have informed the administration for help”

Four ships with nine crew for each had left from Cochin on March 24, a day after a lockdown begun, and arrived in Guptipara via Kolkata port on April 2. However, since the IWAI officials, could not turn up due to lockdown, the hired crew had to remain on board.

The IWAI is an autonomous authority run with the grant by the Ministry of Shipping, which undertakes projects for the development and maintenance of Inland Waterway Terminal infrastructure on National Waterways. Sources said the four ships are meant for ferry service in Bengal and the North-eastern state.

An officer of IWWI in Kolkata said, “The lockdown unsettled the initial plan of crew transfer. We are now hoping to do the job on April 14”. “We have requested the local administration to extend all possible support to them. We are hopeful their problem will be sorted out”, he added.