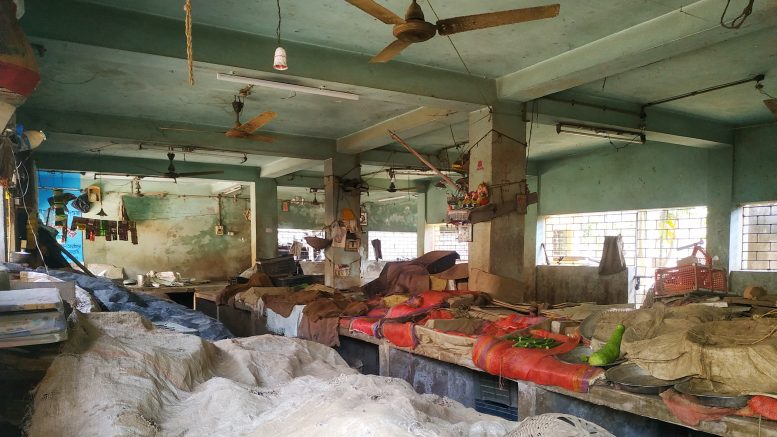 A deserted Baro-Muragacha market after the closure

Hanshkhali, April 7: In an unusual instance of awareness around fifty vendors who sell vegetables and fish have shut down their market in Hanskhali from Monday morning accusing the customers of overcrowding it ignoring their appeals for maintaining a safe distance to avoid any possibility of transmission of coronavirus disease.

Since they failed to evoke any response for the need for a safe distance, the vendors at the Baro-Muragacha market located on Bagula-Hanshkhali road, have suspended business until the lockdown is withdrawn. A seller puts a lock on the market gate

The vendors took an instant at around 9.30 am on Monday, when the situation went out of control due to a heavy rush in the market created by the unruly customers who refused to maintain a safe distance.

After an impromptu meeting, the vendors made an announcement at about 10 am appraising the customers about their decision to suspend the business.

Sakti Biswas, a vegetable vendor and president of the Baro-Muragacha market committee said, “We have been compelled to take such a decision despite knowing that this would put us in serious financial crisis. But, we cannot afford to take any risk. We on several occasions appealed the customers with folded hands to maintain distance and avoid crowding, but none had listened to us”.

Local sources said the Baro-Muragacha vegetable market, located on Bagula-Hanshkhali road was constructed by the Hanskhali panchayat samity a few years ago to accommodate the local seller who used to sale vegetables and fish on open space. The market, which has specific entry and exit points, has a separate wing for vegetable and fish vendors. Around ten thousand people under Bagula-II gram panchayat and adjacent areas are solely dependent on the market, local sources said.

Milan Biswas, a vegetable seller said, “Since the outbreak of the disease was reported we urged the customers to follow the precautionary guidelines as advised by the state government to minimize the possibility of transmission of the virus. We campaigned in the area for maintaining distance and to avoid overcrowding the market since it has limited space. But no one bothered to listen to us”.

“Many persons in the area have been quarantined. We even found their family members in the market. We feel panicked and forced us to take such a decision for own security”, Biswas further added.

Local sources said, on Saturday and Sunday the vendors had hired two guards to maintain the queue. But, the local residents abused them and took forced entry inside the market. to help us to control the customers. But, they too did not bother to respond. So until the local administration comes up, the market will be remained locked. We will digest this personal loss to ensure own safety” a fish vendor said.

Milton Biswas, a local resident said, “Many customers like me will suffer for such a decision. But, it is true that customers acted in an indisciplined manner”

Hearing about the suspension of business in the market, Iti Biswas Sannyasi, a member of Hanskhali panchayat samity rushed to the spot and appealed the vendors for a reconsideration of their decision. But, they refused to relent.

“The concern of the vendors is a genuine one. They have shown great awareness. But, people will face difficulties in procuring their daily needs if this market remained closed. I have assured them to take up the issue with the district administration so that customers entry to the market is controlled”, Iti Biswas Sannyasi said.

Market committee secretary Sakti Biswas said, “We will resume business if the administration ensures restriction on entry to the market as our protection. Else the market will be opened only when the lockdown is withdrawn”.