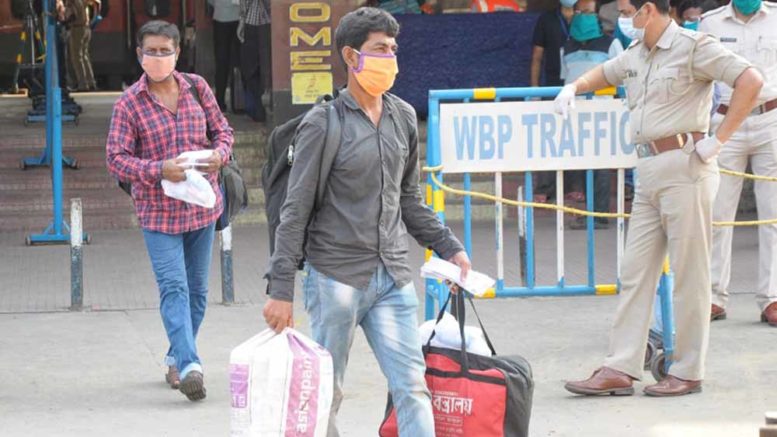 Krishnanagar, May 29: The spike in Covid positive patients continues in Nadia creating a serious concern for the district administration.

On Friday 13 new persons were tested positive which increased the tally to 66 during the last 24 hours. With more number of migrant labourers returning home in Nadia, officials of the district health department apprehend that the spike would increase further in the next few days.

People returning from other states, however, largely being advised home quarantine. The administration appealed such people returning home strictly adhere to the instructions of the health officials and to confine them at home for the next two weeks to avoid any possible outbreak. The families of such persons have also been requested to ensure this. West Bengal on Friday recorded 277 new Covid-19 cases. State health sources said that 250 of these new cases were reported from districts, where a huge number of migrant workers returning on a regular basis. The total number of active cases reported in the state till Friday evening is 2736 which was 1846 in the last week and 550 till the end of April.

Meanwhile, amidst such concern, a train carrying migrant laborers arrived in Krishnanagar on Friday afternoon from Kerala. The trains had 1229 passengers from different districts including 86 from Nadia. Earlier another team of 70 migrant laborers returned Nadia in Shramik special train, which was arrived in New Jalpaiguri station on Thursday night.

At least two more Shramik Special trains, which chief minister Mamata Banerjee angrily termed as ‘Corona Express’ are expected to arrive in Krishnanagar on Saturday. Chief Minister while briefing newspersons in Nabanna on Friday attacked the Railway ministry for carrying the migrant workers by packing them like ‘haystacks’ instead of ensuring mandatory safe-distancing norms.

Out of the new 13 Covid positive cases found on Friday, 5 persons are from Chakdaha block, 2 persons from Santipur, 3 from Ranaghat-1 block,  1 from Krishnanagar-1 block, and 1 each from Krishnaganj and Kaliganj block. Sources in the district administration said that at least 10 of these 13 persons have recently returned home from outsider states.