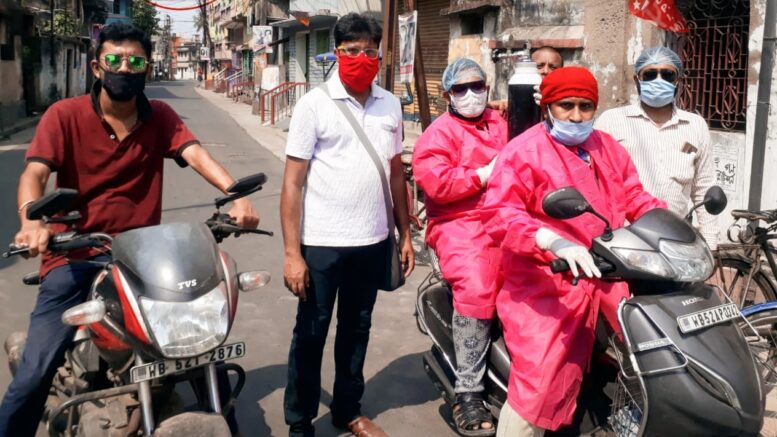 Red volunteers rush with oxygen cylinder in Ranaghat on Sunday

Ranaghat, May 16: Unfazed of their defeat in the just concluded assembly poll, a team of CPM’s Red Volunteers in Nadia’s Ranaghat in a great gesture rushed with oxygen cylinder to provide a relief to their political rival and newly elected BJP MLA Parthasarathi Chatterjee who was suffering from breathing troubles on Sunday afternoon.

Since his oxygen level began to drop and a doctor advised immediate hospitalization for Chatterjee, who also developed Covid like symptoms, the Red Volunteers arranged an ambulance immediately and sent him to a Calcutta based private hospital following his party colleagues and family members failing to make any arrangement of the vehicle.

The incident once again proved the wide gap between the demand and supply in service being rendered to the Covid19 patients.

BJP sources said that Parthasarathi Chatterjee, a former Trinamul leader who joined BJP and was elected from Ranaghat North West constituency, has been suffering from fever for the past few days and undergone a RT PCR test. The report of which is still awaited.

On Sunday afternoon after a failed attempt to arrange oxygen by Chatterjee’s party workers, one of his close aides called the Red Volunteers’ helpline in Ranaghat town. A team of Red volunteers arrived at his residence in Ranaghat town within half an hour with an oxygen cylinder.

Debasish Chakraborty, an advocate and CPM’s Ranaghat area committee secretary, who is leading the team, said, “We received the call to help Chatterjee with an oxygen cylinder at about 1.30 pm and sent it barely within half an hour. There was no question of political rivalry, rather to save the life of a patient being a human being”.

“We also later arranged an ambulance for him as it appeared that his party colleagues and family members failed to get any vehicle even from the local municipality while time was passing out fast”, Chakraborty further added.

The incident came as a shocker to the residents of Ranaghat as many expressed concern about the plight of an MLA who also happens to be the chairman of the outgoing civic body.

“If the family members of MLA and former chairman of the civic body failed to arrange an ambulance, what could be the situation for common people”, a man posted a comment in social media.

Speaking to NfN, Chatterjee expressed his gratitude to the Red Volunteers. “They are the youths of my locality who rushed in to help me without any political prejudice. This is the culture of Ranaghat town. I also believe in this culture and always tried my best to stand by the people in distress”, Chatterjee said over phone on the way to the hospital.