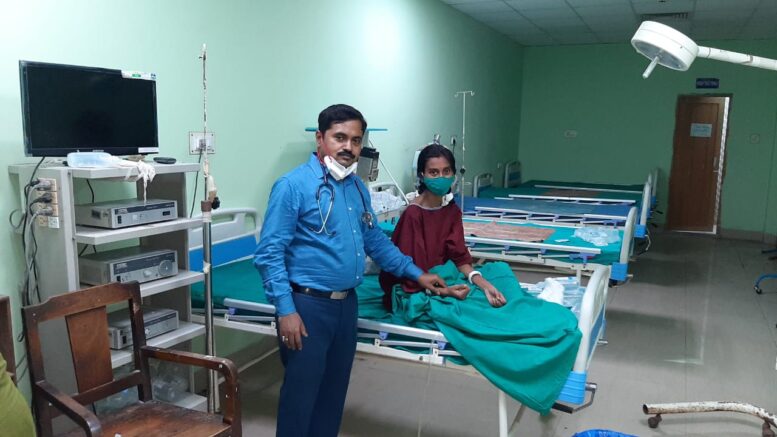 Kalyani, May 18: Swati Barik, 26,  a homemaker from Nadia, who lost her food pipe (oesophagus) due to acid burning in her childhood and became dependent on tube feeding resulting in poor nutrition and multiple complications, has delivered a male baby at the College of Medicine, Kalyani & JNM Hospital on Monday night.

Swati delivered through a cesarean section. Both mother and the baby have been doing well, said a doctor.

Growth and nutrition of the baby of the Kalyani based woman became a challenge to the doctors due to her insufficient intake of food. Nevertheless, a concerted effort of a team of dedicated doctors of the medical college hospital, who administered “Parenteral Nutrition”, an intermittent nutrition therapy eventually made it possible.

Parenteral Nutrition that helped her to become a mother is an artificial administration of nutrition done through the vein of a patient. Such nutrition includes protein, fat, minerals, electrolytes, carbohydrates, vitamins, albumin and elements which a patient cannot consume and absorb in normal quantities through the mouth or through a tube. The PN method is used to ensure good nutrition status, particularly in critically ill people.

The doctors claimed that use of ‘Parenteral Nutrition’ to an expectant mother is quite unusual and successfully done for the first time in the state. Gynaecologist Mriganka Moulik Saha, who led the team of doctors, said, “The method of Parenteral Nutrition is generally applied to critically ill patients. But, we adopted this method since we left with no option to ensure nutrition and growth of the baby”.

During December last year, Swati, who was then pregnant for 12 weeks, came to the College of Medicine, Kalyani & JNM Hospital for an abortion. Doctors said that she was very concerned about the nutrition and growth of the child due to her insufficient food intake. But the doctors eventually changed her mind as they offered support taking her case as a big challenge.

“Her case came to us as a big challenge. The expectant mother has a bizarre past that costs a vital organ of her body. She accidentally consumed acid which damaged her food pipe and made her dependent on tube feeding permanently. Since tube feeding is a critical process and does not provide sufficient nutrition which a normal human being needs, we decided to explore alternative methods for her nutrition to save the baby”, Gynaecologist Mriganka Moulik Saha said.

Medical superintendent of the hospital Avijit Mukherjee said, “Our objective was also to develop the woman’s biological system fit and viable enough to sustain the baby as an expecting mother.

The hospital authority formed a team considering Swati’s case as a special one for research and study purposes also. 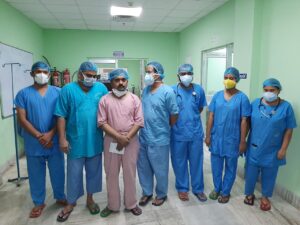 “We formed a team and discussed her case with other doctors and eventually decided to try Parenteral Nutrition in a sustained manner. During the past six months, she was administered the therapy at least thrice a week. Each time she was admitted to the hospital and given it. At the same time we also administered albumin doze through her vein to ensure the baby’s growth”, said Mriganka Moulik Saha while terming the successful delivery of the child as a result of team work.

“As far as we know this is the first such successful attempt to apply Parenteral Nutrition method on any expecting mother in West Bengal. I have not found any reference of using such a method in other states in the country as well. So in that aspect, it is a pioneering attempt”, said an elated Mriganka Moulik Saha, who is also an Assistant Professor at the JNM Hospital & College of Medicine, Kalyani.

“I am thankful to all the team members that includes eminent surgeon and our Medical Superintendent Dr. Avijit Mukherjee, Dr. Anupam, Dr. Amir, Dr. Rahul, as well as post graduate trainees like Sagar, Swarna, Anindita who all put their best to make this endeavour successful”, he added further.

Swati, who was found elated with her baby, said, “I lost hope about the survival of the baby due to my physical limitations. But, the doctors encouraged me to keep the baby and assured all support so that I could become a mother. It is a great feeling and I am grateful to the doctors”, she said.

Swati’s husband Pushpen Kumar Barik said, “I am thankful to all the doctors in the team. I had absolute faith in them, particularly Mriganka Moulik Saha, who always encouraged my wife by boosting her mental strength apart from taking best care of her during the entire period of treatment”.