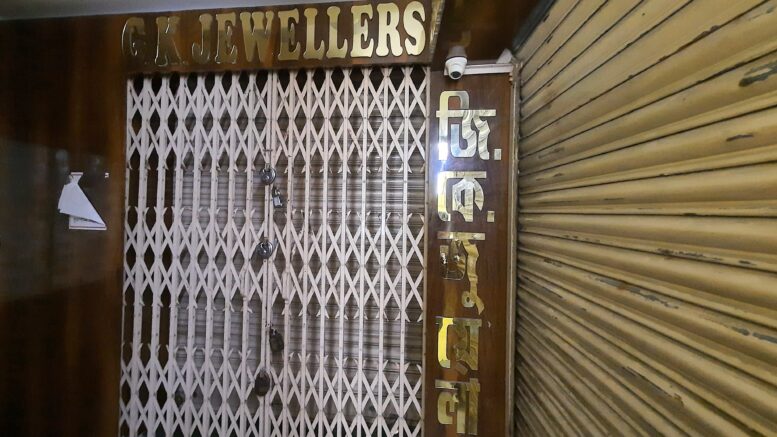 Ranaghat, Sept. 15: The Customs Preventive wing authorities have expressed concern over a smuggled gold supply racket that has become active to lure the jewelers with cheaper price and eventually spoiling that gold market in the country which is trying for a revival after a prolonged dull condition due to Covid19 restrictions.

With its Preventive and Intelligence wing observed an alarming increase in smuggling of gold from foreign countries, it has at the same time launched a drive to unearth the ‘smuggled gold’ supply racket in West Bengal. In one such drive, the preventive and intelligence wing of Customs department has seized smuggled gold bars weighing 1.026 kg with a market value of about Rupees 48-lakhs apart from unaccounted cash of Rupees 87.77-lakhs from a Ranaghat based jewelry shop during a raid on Tuesday night and arrested its owner.

The Customs team conducted the raid at the GK Jewelers located on Subhash Avenue of the town on the basis of a tip off when it seized the gold bars with foreign inscriptions.

“Since the shop owner identified as Chanchal Karmakar failed to show any document in connection with procurement of the gold as well the sources of the cash, our team apprehended him”, a senior official of the Customs investigating team said.

The accused was taken to the city the based Commissionerate of Customs (Preventive) for interrogation and later handed over to police. One of probing team members said, “The smuggled gold bars were brought to the shop for melting to make jewelry with local marking”.

“We are trying to bust the whole racket of gold smuggling that is active across the state. Involvement of other persons in selling and purchasing of smuggled gold are being investigated and appropriate actions will be taken in due course”, the official said.

Senior officials attached to the preventive wing of West Bengal Customs claimed that since the market condition being restored to normalcy after a prolonged dull season due to Covid19 restrictions, smuggling of gold has increased largely.

“A racket has become active to supply such smuggled gold to jewelry shops across the state luring the owners for cheap price but being trapped at the end. Witnessing this trend developed after the Covid19 pandemic situation, our preventive wing has become vigilant and conducting surveillance in town some remote rural areas which shares border with Bangladesh”, the Customs official said.

“In fact we found that some recent seizure of gold from Khidderpore, Sinthee, Howrah were actually channelized from Bongaon, Bashirhat, Ranaghat which are close to Indo-Bangladesh border. ”, the officer further said adding that the department has also alerted the Border Security Force authorities to be careful to prevent smuggling of gold.

BSF’s South Bengal Frontiers sources said that on July 19, they seized 30 gold biscuits weighing about 3.5 kg with an approximate market value of Rs.1.72 crores from a truck driver from the Petrapole international cargo port in North 24 Parganas. On September 5, the BSF seized about 2.5 kg gold worth about Rupees 1.27 crores from an Indian smuggler in Amudia village of North 24 Parganas.