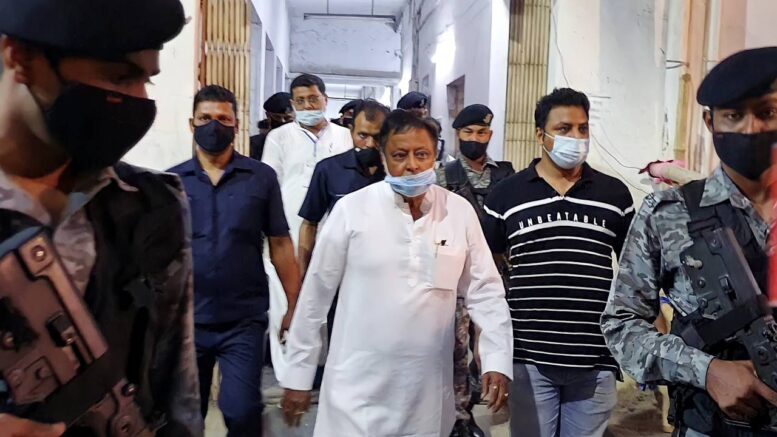 Ranaghat, Aug. 26: The additional chief judicial magistrate’s court in Ranaghat has issued an arrest warrant against Mukul Roy for failing to appear before it physically in compliance with its directions issued in connection with the murder of Trinamul Congress MLA Satyajit Biswas.

The arrest warrant signed by the ACJM Protyai Chowdhury was served on Thursday with the direction to execute it by September 27.

Roy on November 3, 2017, left Trinamul to join the BJP and was associated with the saffron party at the time of the MLA’s murder. He, however, returned to Trinamul on June 11 this year

The ACJM court earlier on two occasions had directed Roy to appear before the court in person on August 16. But he failed to appear apparently ignoring the direction, which prompted the court to issue the arrest warrant.

Sources said that separate teams of both CID and Hanskhali police visited Roy’s residence in Kanchrapara when they slapped the court’s order on its door in the presence of a local witness since he was not physically available there.

The lackadaisical approach of Roy to ignore the court order in absence of disposal of his bail petition at Calcutta High Court has meanwhile embarrassed the Trinamul leadership. “It’s a legal course and none can avoid it. Roy should have appeared before the court to surrender complying with the ACJM’s direction and appeal for bail”, a Trinamul leader in Nadia said.

Roy’s lawyer Suman Kumar Roy said, “We came to know about the arrest warrant today. It is a bailable warrant. I will talk to my client and decide the future course of action in the wake of the arrest warrant. He cannot be arrested owing to the protection ensured by the Calcutta High Court”.

Krishnaganj MLA Satyajit Biswas was shot dead near his home on February 9, 2019. Five persons including Mukul Roy, who was a BJP leader then, were named in the FIR lodged by demised MLA’s close friend and party activist Milan Saha. CID in a supplementary charge sheet filed on December 5, 2020, accused Roy of conspiracy and murder of the Trinamul MLA.  To avoid the arrest Roy had appealed to the Calcutta High Court for bail. The court had granted protection for four months directing him to co-operate with the investigating agency. The protection was later extended a number of times due to the Covid situation.