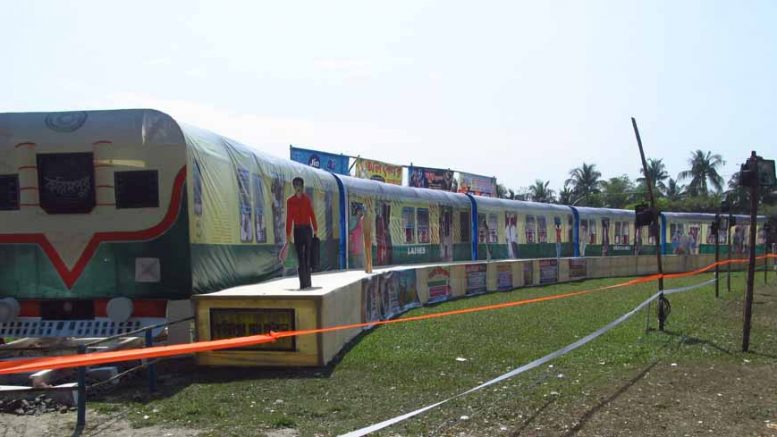 Unfulfilled dream...A club in Karimpur recently made a model of train parked at Karimpur rail station on the occasion of a cultural festival. Picture by Ashis Pramanik

Karimpur: The bus accident in Daulatabad of Murshidabad that claimed 45 lives on January 29 this year has revived the demand for a railway link between Krishnanagar and Berhampur via Karimpur.

To reiterate their demand, youths in Karimpur have launched campaign in social media asking every resident to send a petition to union railways minister Piyush Goel for 146km stretch from Krishnanagar to Berhampur via Karimpur. They have drafted a petition which is being shared in social media for mailing individually to the railway minister. A map: Existing rail track and the demanded link

The local residents have meanwhile formed a forum titled ‘Karimpur Wants Railways’ which has planned to organize a mass convention at Pannadevi College ground in the town on March 25 afternoon to reiterate their demand.

Brain behind the online petition campaign Durbadal Dutta, a teacher at Jamsherpur BN High School said: “During the past few decades several appeals were made to the centre. The state government was also requested to take up the matter with the centre. But, the most coveted railway link remains elusive to the people of Karimpur and to the people of Tehatta sub division as a whole. Now this petition through social media is probably our last resort to draw the attention of the centre”.

At present there is an existing rail link between Krishnanagar to Berhampur that goes parallel with the NH34. But over 18-lakh people who live in Tehatta sub division in Nadia and Domkol close to Indo-Bangla border, have to depend on the bus service. Nazirpur, Kanthalia compelled to undertake laborious bus journey risking their lives to reach Kolkata. People mostly belong to poor financial background live in the region with farming as their main occupation. They are forced to bear expensive bus fare to visit hospitals either in Berhampur or Krishnanagar  ”, said Tanmay Basu, a Karimpur resident.

“Many of the victims of the January 29 bus accident in Daulatabad were such people who were going to Berhampur to visit doctors. If a train link were there, they could opt for train journey”, Basu added.

Teacher Durbadal Dutta said: “During last 113 years at several surveys were conducted, but a rail link to include Karimpur to the railway network of the country remained elusive for the people living in the region”.

“The people living in Tehatta and Domkol Sub Divisions have shown much of their patience so far. But, in the past 113 years they got only repeated surveys, but never the rail tracks. So we are gradually approaching towards launching a movement”, said Dutta.

In 1905 M Radice and captain Magniac of East Bengal State Railways while conducting the survey proposed 26 stations in the stretch with an estimated cost of Rs.18,41,560. Five years later in keeping with the decision of the Nadia district board, a British farm HV Low and Co of Calcutta undertook another comprehensive study and submitted a revised estimate for construction of light railways from Krishnanagar to Jalangi with an estimated cost of Rs.17,56,376 and proposed to complete the work within ten months.

After this during 1940s, two other surveys were also undertaken by British government. After independence centre took 53 years to conduct the fist study with no result.

In 2000, rail minister Mamata Banerjee in her budget speech had announced a fresh survey for Krishnanagar-Karimpur rail link. In 2002, Krishnanagar to Charatala (Chapra) was announced. But nothing was done eventually.

Trinamul Congress Karimpur-1 block president Tarun Kumar Saha said: “It is a genuine demand. We in past written to Rail minister on the issue and will write again.  We also support the campaign in the social media”.