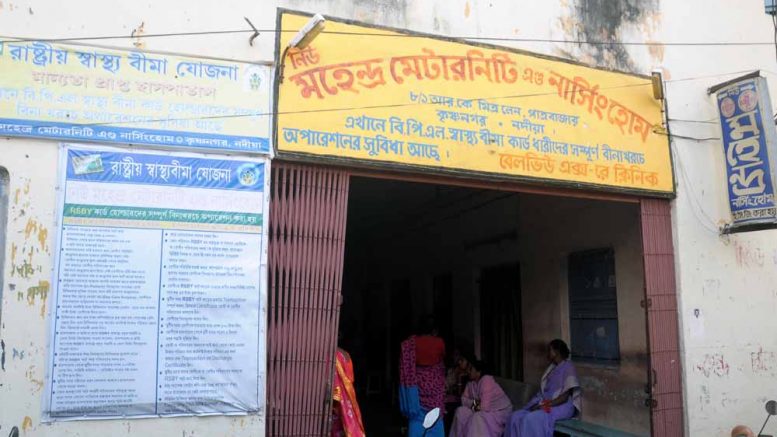 Krishnanagar, Nov. 13: Father of a newborn today lodged a complaint with Krishnanagar police claiming that the male baby that her wife delivered at a nursing home on Sunday afternoon was exchanged with a female baby by the nursing home authorities a little after he was born.

Baban Garai, a resident of Sondanga of Dhubulia has also accused the nursing home authority for demanding Rupees Two lakhs from him for arranging a DNA test to confirm the biological identity of the two babies despite acknowledging their mistake.

The authorities of Mahendra Maternity and Nursing Home, however, ruled out the allegation of swap, but acknowledged that it was mistake by a staff to identify the father of the newborn while showing the baby actually created the problem.

Police have, however, yet to start a case. It has advised the nursing home authorities to take immediate action to settle the dispute.

In his complaint Baban Garai, a mechanic by profession, told the police that on Sunday his wife Parvati delivered a male child, which the nursing authorities shown to him and his wife.

“They had shown a male child after delivery, which I also acknowledged in writing as they asked for. But, later they handed over a female child to my wife. When I raised objection they claimed the male baby shown earlier was not delivered by my wife. They said that my wife actually delivered a female baby and the male baby was delivered by another woman. But, we refused to be convinced by this interpretation”, Baban said.

“As far as I can recall Parvati delivered a female child through C-section. She was conscious during the delivery and the newborn was also shown to her” – Swadesh Garai (Gynecologist)

Manager of the nursing home Dibyendu Pal said: “There was another woman, Himi Mandal, on the adjacent bed of Parvati, who delivered a baby boy around the same time. Our staff committed the mistake while showing the newborn to the respective family members after delivery. Himi’s male child was wrongly shown to Parvati’s husband Baban Garai and Parvati’s female child was shown to the family members of Himi”.

“There was identify stickers on the newborns, nevertheless, we have offered a DNA test for both the babies at our cost as this is an unintended mistake on our part. We have not demanded any amount and kept both the babies and their mothers at the nursing home”, he added.

Meanwhile, gynecologist Swadesh Garai, who delivered the babies said: “I delivered three babies on the day and as far as I can recall Parvati delivered a female child through C-section. She was conscious during the delivery and the newborn was also shown to her”