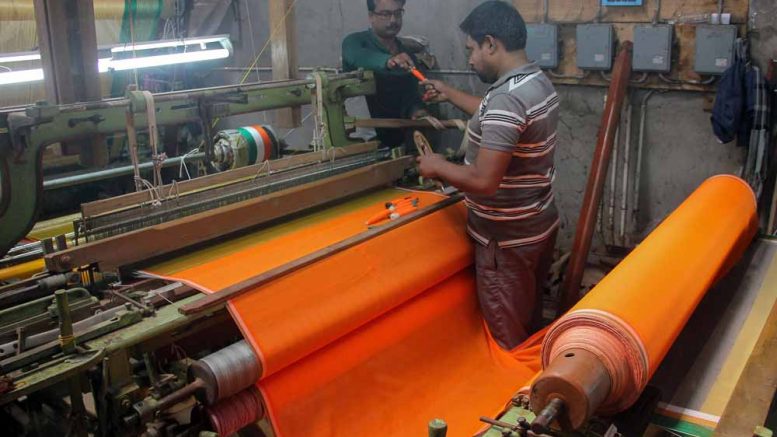 The weavers making the longest sari at a workshop in Krishnanagar. Picture by Abhi Ghosh

Krishnanagar, Nov. 13: A weaver from Nadia’s Phulia has been making a 3.85-km long sari, claimed to be the longest one in the world, which he would dedicate to the Nation on the ensuing English New Year’s Day as a mark of his tribute to the Motherland. National award winning weaver Biren Kumar Basak, who has designed the sari and leading a team of weavers to make this unusually long sari, equivalent to gross length of 700 saris, would, however, distribute it among the poor women cutting it into 700 pieces each of 5.5-meter full length sari once it is displayed at a school ground in Phulia on the day.

Basak claimed that his creation world surpass the 3.05-km long Sari made by Bharuch district administration in Gujrat in March this year that earned them a Guinness book entry.

Basak said: “This would be an art work dedicated to the Nation for sake of the people. I will not keep it as art work rather distribute among people for use”.

With this objective Basak and five of his weavers have been working round the clock at a powerloom in Krishnanagar using 316kg polyester yarn of saffron, green and white color brought from Surat to meet the target of January 1 when he would display this special sari.

“My dream was to make the longest National flag. I then changed the mind to make longest sari using the colors of national flag so that it can be used by people. My workers also supported this idea and I started work from September”, Basak said.

The elderly weaver was conferred the National award in 2012 and Sant Kabir award in 2013 for his outstanding skill and exquisite craftsmanship by Ministry of Textiles. In last year Prime Minister Narendra Modi handed over the awards to him in Chennai.

Basak, who was conferred honorary doctorate (honoris causa) by World Record University on Saturday (Nov.11) in New Delhi for his work depicting epic Ramayana on hand loom woven sari, said: “The production cost of this sari would be around Rupees 3lakh, which I have decided to incur to materialize my dream”

Raju Basak, a weaver who is monitoring the progress of the sari said: “We have already completed around 3200meter and hopeful to reach the target in time”.

Biren Basak’s son Abhinaba said: “Around 500 school children will make a chain to display the sari in a big football ground of school in Phulia on January 1”

“My dream was to make the longest National flag. I then changed the mind to make longest sari using the colors of national flag so that it can be used by people” – Biren Kumar Basak