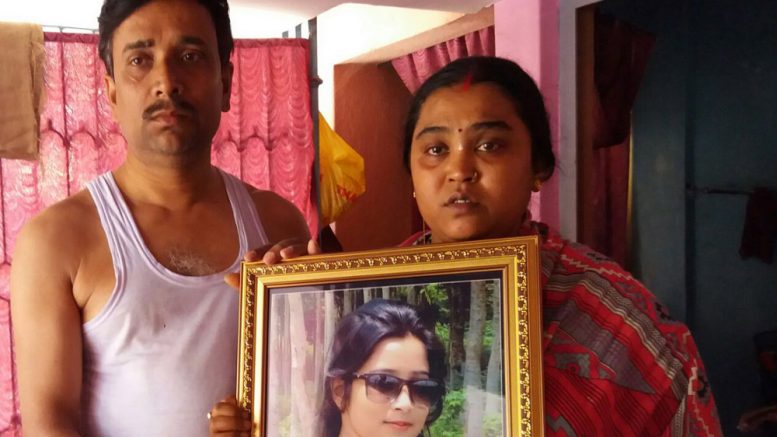 Manoranjan Pramanik and his wife with the portrait of their deceased daughter Moumita. Picture by Tito Chakraborty

Ranaghat, Mar. 15: The state health directorate today show caused a lady doctor and a staff nurse of Ranaghat sub divisional hospital for alleged negligence on their part that led to death of a BA first year student of Ranaghat College last year.

Physician Irani Ray Chaudhuri and Nurse Keya Roy Chowdhury, against whom an FIR was lodged at Ranaghat police station by the student’s father, today asked by the director of health services Biswaranjan Satpathy to submit their reply within three days.

At the same time superintendent of the hospital Debdulal Mukherjee has been put on transfer list as a punishment for giving clean chit to the accused doctor and nurse in his initial probe.

“We have show caused a doctor and a nurse today as their role to handle the patient was questionable which was also pointed out in a probe conducted by an ACMOH”,  director Satpathy said.

The decision was taken after an hour long hearing today at the director’s chamber in Sasthya Bhawan where all the accused doctors and nurse appeared personally.

On August 24 last year Manoranjan’s daughter Moumita (18), a BA first year student of Ranaghat College, fallen on the Gangnapur railway station while disembarking from a train. She suffered head injuries and taken to Ranaghat sub divisional hospital by his parents at about 4.30pm. She was examined by Irani Ray Chaudhuri at the emergency who admitted her to female medical ward. But, for about four hours, Moumita allegedly lied unattended. At 8.15pm Madhab Das, a doctor visited her and advised CT scanning, which found ‘hematoma’ in Moumita’s brain and referred her to NRS hospital, where early in the morning.

Later assistant CMOH (Ranaghat) T.K.Khatuya conducted a probe that found Irani Ray Chaudhuri negligent as she neither give advice of CT scan of the brain nor she felt it necessary call a surgeon to examine the girl. The probe also found Nurse Keya Roy Chowdhury negligent as she did not send a call book for a surgeon to examine the girl in the intervening period even after watching her condition deteriorating.