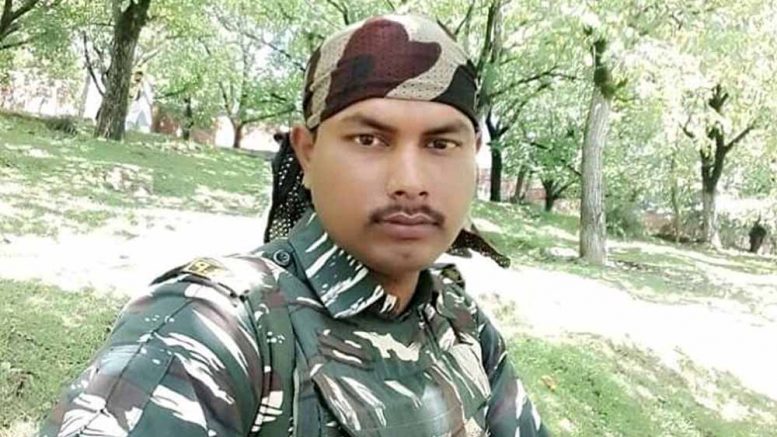 The young constable attached to 98 Battalion of CRPF died in terrorist attack in Kashmir on Thursday barely within two hours when he last called his father Sannyasi Biswas (56), a farm labour to reiterate his wish.

The blast site in Pulmawa in Kashmir

It was about 1pm, Sudip called his father on his phone from a transit camp in Kashmir and shared his plan to visit home by end of this year to complete the remaining construction work of their home that he began last year.

But, Sudip died at about 3.15PM when suicide bomber driving a car packed with explosive rammed a bus carrying the personnel on Jammu Srinagar highway in which he was travelling with other jawans. The mortal remains of the slain jawan would arrive at his native village Hanspukuria-Telipara in Tehatta block of Nadia on Saturday morning. Union minister of science and technology Dr. Harsh Vardhan would personally escort the body upto his home along with a team of CRPF personnel who would pay the last tributes and organised the final rites.

His father Sannyasi said, “At about 1pm Sudip called me when I was busy working in a mustard Lawyers in a condolence meet in Krishnagar

field. He told me about his plan to visit home by end of this year so that he could complete the construction work of our house. He asked me to take rest from work, but, he took rest before me forever”.

Sudip died while travelling in a vehicle of Battalion 56 that was hit by the SUV laden with explosives.

The bad news came to his native village during the wee hours of Friday morning. A CRPF official had called Sudip’s brother in law Samapta Biswas at about 3.30am. Sudip passed HS examination in 2010 from Hanspukuria Vidyapith. To overcome financial crisis, he joined CRPF in October 2015. He served in Arunachal Pradesh before posted in Kashmir.

Sudip came home on vacation in December 19 last year and left for Kashmir on January 15 to resume duties.

His younger sister Jhumpa Biswas, who got married two years ago said, “His dream was to make a home and give it to parents as an award for them so that patents could live with little comfort in rest part of their lives. So he began construction works, which he decided to complete by end of this year. But, the blast shattered all of his plans and dreams”.

A pall of gloom descended in the village since the news arrived. Sudip’s mother Mamata was fainting repeatedly. “I would not probably cry if my son die in a war…but I cannot digest such death of my son and the other like him…The government should answer the mothers like me for the serious lapses on its part that claimed so many lives”.