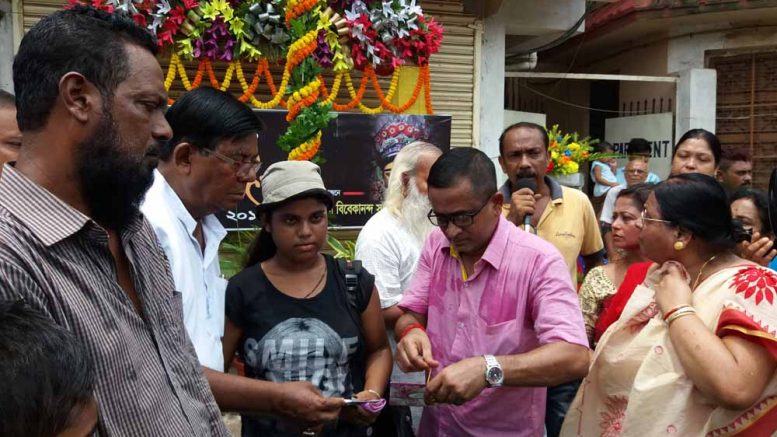 Rajeswari being handed over Rupees 25000 by a senior member of Vivekananda Sarani Durga Puja Committee in Ranaghat on Monday. Picture by Tito Chakraborty

Ranaghat, July 3: Members of a Durga puja committee in Ranaghat today handed over Rupees 25000 to a girl suffering from Hodgkin’s lymphoma, a type of cancer, and also vowed to provide her with more support later during the puja by curtailing expenses so that she could continue her study and fight the disease as well in absence of her father who committed suicide in May this year being unable to bear cost of her treatment.

The members Ranaghat’s Swami Vivekananda Sarani Adhibasibrinda Puja Committee today given the amount on the occasion of their “Khunti puja” and took the vow to help Rajeswari Roy (17), a BA (Hons in Political science) first year student of Ranaghat College, with more money so that she could study without tension and get proper treatment.

The puja committee would, however, decide about the exact amount later on the basis of entire paid collection.

The puja, which is just two years old puja is organized jointly by the local residents who live on Vivekananda Sarani which include a large number of Muslim residents, the members of the Mosque committee

Puja committee president Babul De said: “This year we have set a target to collect Rupees 3.5lakh to organize the puja. But, we have planned to keep a part of the subscription aside for the girl. For this we would curtail our expenses on decoration, illumination and other celebrations. We would rather celebrate by extending our support to the girl from who has been fighting with cancer and poverty. Today we have given her Rs.25000 as a scholarship from our initial collection of subscription. We will pay him more again during the puja”.

Rajeswari, a resident of Uttar Nasra in Ranaghat, who was diagnosed with Hodgkin’s lymphoma in 2015, has passed this year’s higher secondary examination from Brajabala Girls’ high school with 71.2% marks. The Telegraph carried an article on her success in June 2 edition.

Hodgkin’s lymphoma (HL) is a type of lymphoma or cancer that starts in white blood cells called lymphocytes.

Rajeswar’is world crumbled on May 22 when her father Rajesh Roy, a grocer, ended life by hanging self with a rope being depressed over the increasing cost of her treatment.

“The recurring cost of my treatment including chemotherapy and injection was about Rupees 10000 per month, which became quite tough for my father to bear. My mother works as a health worker with Ranaghat Municipality and earns around Rupees 5000. But, it was grossly not enough to run the family. But Baba used to suffer from depression, His death changed my world, I feel pain for him”, Rajeswari said.

“Today I am free of tension as the Vivekananda Sarani puja committee has assured me help from their puja expenses. It will help me largely to meet my expenses for treatment and study as well. Many people helped me to get admitted after my father’s death. Nevertheless, I was concerned about meeting the recurring expenses for treatment which is around Rupees 4000 per month. But I am grateful to the puja committee as they assured me of help”, she said.

Tazim Ali, a member of the puja committee and secretary of Ranaghat Mosque committee said: “We have decided to stand by Rajeswari because we did not want her dream to be shattered in absence of her father. We salute her strong resolve and determination. So we decided to extend a little support to her.