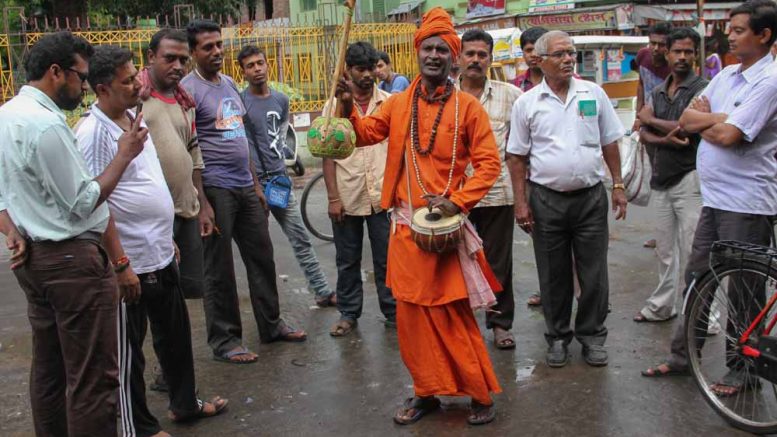 Santipur, July 4: The success of Kanyashree scheme that earned United Nation’s public service award for chief minister Mamata Banerjee from The Hague has found new words on the lips of a baul from East Burdwan.

Swapan Dutta, 51, a devoted baul singer from Burdwan’s Khaja Anwar Behr has vowed to make people aware about the success of Kanyashree scheme and the international honour it has earned for the state riding a bicycle across the state.

The gifted baul singer, who has earlier penned one hundred songs on Kanyashree and gifted its collection to chief minister Mamata Banerjee during Mati Utsav, has started touring across the state on his bicycle, particularly the remote rural areas to spread the message of the benefits of the state government’s flagship welfare scheme. He thinks that message of Kanyashree is more important to prevent early marriage of girls in rural areas.

The music that has been taking him from one village to another for over last 20 years with songs on many issues and causes with an earnest for making a healthy society had eventually brought him to Santipur on Sunday from where he began his Nadia visit.

Dutta throughout the day visited remote villages like Baktarghat, Nrisinhapur, Guptipara ghat, Muslimpara, Bagh-achra, Babla where he interacted with the elderly villagers, made inquiries about their girl children and appraised them about the benefit of the Kanayshree project and about the UN’s public service award achieve for it through the baul songs penned by him.

Dutta, an honors graduate in accountancy from Burdwan Raj college said: “The kanyashree project is great initiative to prevent early marriage and drop outs of girl students in rural Bengal. It is a revolutionary initiative and I have become a fan of this endeavor of chief minister. I was so overwhelmed by the scheme that I penned over hundred songs on it and started singing in crowded areas, fair places, and markets to make people aware”

But, with the chief minister Mamata Banerjee conferred with the United Nations public service award at the world forum in The Hague, Dutta’s responsibility has increase.

“This is a great success Kanyashree earned from The Hague, which I want to make people aware so that no girl children from poor families suspend studies. I need no money for it. I just love to do it as my social commitment”, he said.

No matter how he tough he struggles to survive with his paltry income of Rupees 4000 which he earns by teaching music and painting to children. As a folk artiste he earns an additional Rupees 1000 as monthly honorarium provided by the state government.

Before leaving for “I have planned to make time in every fortnight visit different areas in state riding bicycle. I am grateful to my students who also help my sometimes financially for my journey. I feel myself more an activist than an artiste and so in past too often taken up such visit to create awareness on different social causes”, Dutta added.

Tapan Majumder, secretary of Marami, a social organization, who knows Dutta said: “He is an unparalleled character. I never had seen such a person who is so much dedicated for betterment of the society”.