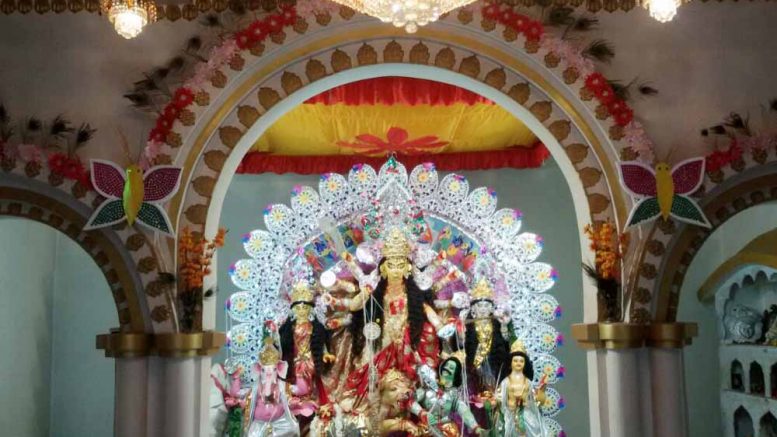 Ranaghat, Sept. 30: The members of Sharma Chaudhury family of Sharma Para in Ranaghat still ‘beg’ from their neighbors to organize Durga Puja at their home as their forefather done it many years ago. Even though it is now done in a symbolic way, but family members do it not just for sake of tradition rather they have found a sublime objective in it. By begging, the family members shed off their pride and prejudice so that they could mingle up and interact with everybody in the society.

With the same concept, on Dashami the family members lie down before the deity and roll on the ground to get soiled in a bid to get rid of arrogance.

At the Sharma Chaudhury family Goddess Durga known as ‘Buri Maa’ and this year, “she” turned 755 years. The family has, however, no definite proof in support of her age. Their claim is largely based on a research by eminent journalist Pranabesh Chakraborty, who in one his articles claimed that forefathers of Sharma Chaudhuri family had began the puja 1262.

‘Buri Maa’s age, however, be guessed from the fact that her puja is done chanting the mantra scripted in Bengali letters on the palm tree (Taal pata), which is aged more than 500 year. “It has become very delicate to handle it. Nevertheless, puja is done chanting the mantra from it. We keep the puthi before the Goddess and read it’, said present head of family Sambhu Nath Sharma Chaudhuri, a retired teacher.

How this tradition of begging began?

As per the family legend Ramkumar Chakraborty, a poor priest from Birbhum district while returning home before Durga Puja on a boat was got delayed on the way due to sudden bad weather.

“It was autumn, but bad weather hampered journey and he failed to reach home before Durga puja. He compelled to anchor his boat at Brahmanagar, which later named as Ranaghat. In the same night Goddess Durga revealed in his dream and instructed to organize the puja there by begging from the local people. He followed the instruction and began the puja in Brahmanagar”, said Sambhunath.

“After the puja, Chakraborty stayed back in Brahmanagar and set up his home. He also got his daughter married there. Later her two sons – Bamacharan Mukherjee and Agnishwar Mukherjee continued the puja. The present generation of the Sharma Chaudhuri family is the successors of Agnishwar – who had actually made the family puja a public festival in real term”, said Sambhunath. “It is no more family event, rather a community affair”, he added.

“Many years later Nadia King Krishna Chandra Roy helped our family and patronized the puja as he also came to know about the background of Buri Ma of Brahmanagar”, said Sambhunath.

‘This year too following the tradition I begged from the neighbors accompanied by my other brothers. It is a symbolic begging to maintain tradition and to leave pride and arrogance so that we could mingle up with all in society irrespective of their social status and invite them to take part in puja of Buri Maa“, said Sambhunath.

“Similarly on Dashami we lie down before the Devi idol and roll on the ground to get soiled as gesture of humbleness”, he added.