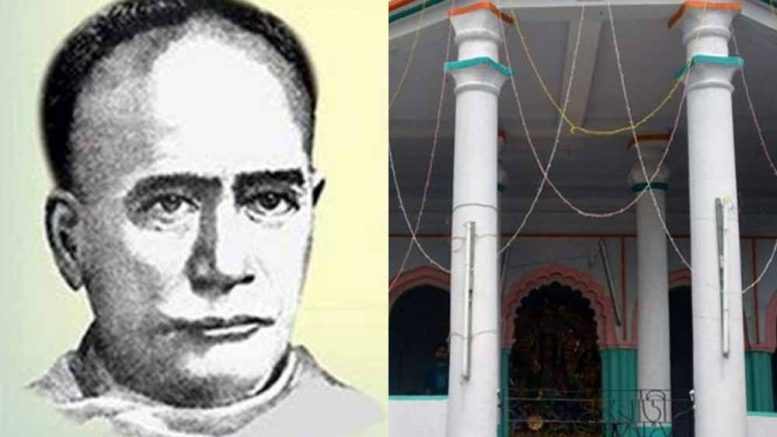 Ishwar Chandra Vidyasagar and the Puja Mandap of Bhattacharyya family in Bahirgachi where he performed Durga puja as a priest. Picture by PRANAB DEBNATH

Muragacha (Nadia), Sept. 30: A simple gesture by Ishwar Chandra Vidyasagar made permanent impression of gratitude among the members of Bhattacharyya family in Bahirgachi village of Nadia’s Muragacha.

The family members remained indebted to this great social reformer of Bengal as around 160 years ago he rescued the family from a big trouble during Durga puja.

Vidyasagar, who had a close friendship with Sanskrit scholar Madhusudan Tarkapanchanan, a member of the Bhattacharyya family, had spontaneously took the responsibilities to perform Durga puja as a priest on a Maha Ashtami Day after his friend fell ill.

So even after such long years while performing the puja at the same mandap, where Vidyasagar once performed, the family members remember this key figure of Bengal renaissance. The Devi idol at the Bhattacharyya family in 20107.

“Madhusudan Tarkapanchanan, who is one of our forefathers, was a great scholar and author of many books. He also used to perform puja personally. But on the day of Maha Ashtami Madhusudan fell ill and became unconscious. He was not in a position to continue the pujan. This unleashed a shockwave among family members as there was none who could perform the puja. Ishwar Chandra Vidyasagar, who was present then at our home, offered his service spontaneously and performed the puja”. said family member of present generation Madhab Bhattacharyya (51), an IT professional.

“The instant gesture of Vidyasagar moved our family members. We do not know when exactly it happened. We guess it occurred sometimes during late 1850s. But it made us indebted to him forever. It was due to a great bond of love between Vidyasagar and Madhusudan that save our family from an embarrassment on the day”, he added.

The Bhattacharyya family of Bahirgachi has a great legacy of producing philosopher, academic educator and writer as well.

The legacy began with Rambhadra Tarkalankar, a Sanskrit pundit whom Nadia king Krishna Chandra Roy (1728-1782) appointed as head family priest. Rambhadra, who lived in Bahirgachi village, had six sons. It was Rambhadra who began Durga puja in Bhattacharyya family during late part of 17th century.

Madhusudan Tarkapanchanan was son of Rambhadra’s second son and had always performed the puja personally following the family tradition.

Madhusudan Tarkapanchanan was great Sanskrit scholars. He authored books like “Bichar Darpan”. The king of Burdwan appointed him as “Sabha Pandit” (court scholar).

“During the late part of 1850s, Ishwar Chandra Vidyasagar, who became an icon by then, developed close proximity with some likeminded sanskrt scholars for their pragmatic thoughts. Madhusudan Tarkapanchanan, Madanmohan Tarkalankar are two of them. Madanmohan Tarkalankar, who had authored first Bengali text book for children, lived in Billwagram near to Bahirgachi village where Madhusudan lived. Vidyasagar often visited the two villages and had even taught children at the “Sanskrit tole’ run by Madhusudan”, said Madhab Bhattacharya.

Another member of the present generation of the family Subrata Bhattacharya said: “Vidyasagar was fascinated by Madhusudan’s liberal thoughts and progressive mind. We heard from our forefather that Madhusudan was a great supporter of Vidyasagar’s initiative for Hindu widows’ remarriage. The relationship between Vidyasagar and Madhusudan developed so deep that Vidyasagar translated Madhusudan’s book “Baman Akkhayan” from Sanskrit to Bengali and also got it printed at own cost in 1873”.

“So for Vidyasagar such gesture was quite natural even though it was quite unexpected from him”, said Madhab Bhattacharyya. We heard from our forefather that Vidyasagar left our home only after Madhusudan recuperated”, Madhab said.