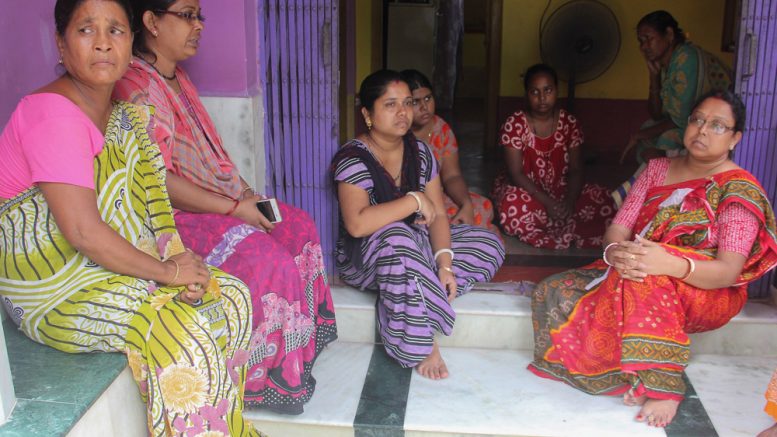 Taherpur, Sept. 11: An unemployed youth who happens to be the son of a catholic catechist of a church, allegedly killed his 75 year old neighbour on Sunday night in Nadia’s Taherpur Christian Para to snatch his gold chain and finger rings luring him for a cigarette which was prohibited for him being a cardiac patient.

Police said, the accused Rocky Biswas (29) took retired farmer Badal Mandal, to his home from where he snatched his gold chain, worth about Rupees sixty thousand before hacking him with a sharp weapon. The accused, however, could not snatch the finger ring even after chopping off victim’s fingers and fled along with his wife dumping the body under his bed.

The victim had a fascination of wearing gold ornaments and was a chain smoker. His elder son recently gifted him a chain and finger rings after securing a job in a hotel in Saudi Arabia. Police said, Rocky developed proximity to Mandal offering him to smoke secretly. The incident that occurred close to the St. Thomas Catholic Church in Nadia’s Taherpur where father of the accused works as a Catholic catechist.

The incident came to light only after Rocky’s wife Tina Biswas informed her father in law Babu Biswas over phone about her husband’s misdeed.

As the victim was last seen with Rocky, the neighbours on Monday night became suspicious and gathered at his residence to ask his father Babu Biswas for whereabouts of his son.

Babu called police who based on the information provided by Tina, recovered Mandal’s body during the wee hours of Tuesday morning, which was kept wrapped with a mat under a cot inside Rocky’s bedroom.

Meanwhile, police have arrested Tina from a hideout in Kanchrapara. However, rocky remained absconding.

A senior police officer said, “Tina is suspected to be an accomplice in the crime. It appears that she knew about the crime and tried to flee. Her role is being examined”.

Police have started a murder case on the basis of a complaint lodged by victim’s daughter Maggie Merry Mandal in absence of his two sons Dipak and John Tapan who work as waiter in a hotel in Saudi Arabia.

Family sources said, Mandal, who stayed with her married daughter went missing a little after he went for evening walk.

Her daughter Maggie said, “My Father used to go for walk in the evening and returned after having tea at a in the market. But he did not return home on Sunday night. We all in the neighborhood searched him throughout the night. Later we came to know that he was last seen with Rocky as he took him to home luring him cigarette. Smoking was prohibited for him. But, we came to know that Rocky used to offer him biri and cigarette, apparently to develop a proximity to my father which he eventually exploited”.

Meanwhile, the local residents have appealed the local parish to evict the Biswas family from the area who has been living on a land donated by it. Parish priest Father Thomas said, “I respect the emotion of the residents. But, I cannot take decision on my own. I have informed the Krishnagar Diocese and other members of the parish who would take final decision”.