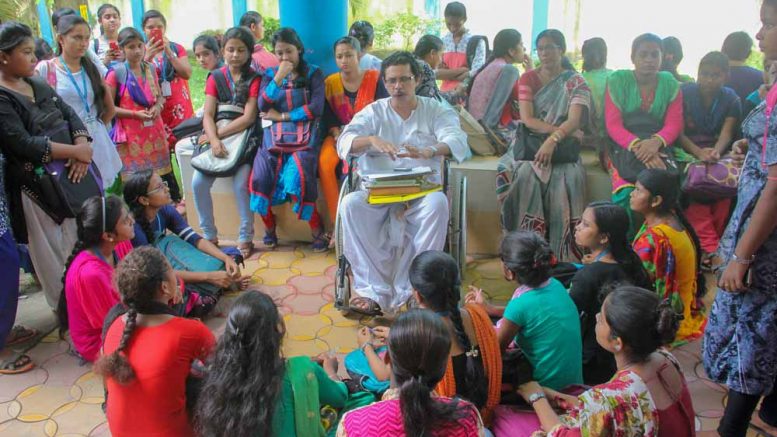 A teacher takes under the sky at Krishnagar Women's College

Krishnanagar, Sept. 6: 20 teachers of Krishnanagar Women’s College on Friday took classes under the sky outside of the college campus after some Trinamul Congress Chatra Parishad activists allegedly prevented them to enter campus as they refused to attend teachers’ day programme organised by the students organisation on Wednesday.

As the TMCP activists kept the main entrance closed preventing entry to inside, the teachers decided to take classes outside campus under the sky and invited the interested students to attend it.

As a result classes were held up to around 1pm, until the agitating students opened the entrance. However, the teachers continued taking classes outside sitting on the ground.

“It is a new experience in distress, but we as the teachers and the students enjoyed it. A section of students tried to create disruption in studies at the campus but the students have unsettled their ploy”, said a teacher.

The students, who attended the classes, however, submitted a written petition before the District Magistrate Sumit Gupta urging him to restore normalcy at the campus so that conducive environment to study prevails.

The agitating students, however, claimed that they did neither prevented anybody to enter campus, nor had any plan to disrupt studies, rather stood at the gate covering their fave with black ribon as a mark of protest of the behavior of the teachers. Sabia Khatun, a TMCP activist said, “We were at the gate to protest the behaviour of teachrrs. The teachers insulted on the Teachers’ day. We organised a programme to felicitate the teachers on Teachers’day. But, they refused to attend. We later go the the teachers’ room and given them clay models of Goddess Durga and Lord Buddha along with food packets. But they dumped all the items to the bin. This hurt us very much as such a gesture was quite unexpected from them”.

The teachers, however, refuted the allegations. They claimed that decision to boycott the Teachers’ day programme was collective and discretionary which the organisers were appraised well ahead. Nevertheless, the some students insisted the teachers to join.

“The section of the students who organised the Teachers’ day programme jointly with college administration often insult us. To mention a specific case the girls in a recent written submission to the college authorities accused the teachers of escaping classes with vested political agenda and also accused the male teachers of using vulgar languages. This hurt all the teachers. So we decided to boycott the programme as we did not want to make compromise with our dignity”, said Sudarshan Bardhan, a teacher in Mathematics.

Some teachers also alleged that the principal of the college Manabi Bandopadhyay is encouraging these students to go against the teachers. “She is trying to harass us by these innocent students”, a teacher said.

The teachers also refuted the allegation that they thrown gift items and food to bin. “We humbly told the girls about our inability to accept their invitation and gift. But, they insisted for take it and eventually left it at the teachers’ room. Before, leaving the college we kept it outside of the room, so that the girls took it away. We neither insulted the girls nor thrown their gifts to bin”, said another teacher.

The allegation and counter allegations, meanwhile, damaging the environment at the campus.

Chandana Sutradhar, a first year student who attended classes today under sky, said, “I don’t know what happened between some students and the teachers. But, It is eventually telling upon our study. Today the students did not allow anybody to.enter campus. The classes were held outside.But this situation not conducive for study”.

College principal Manabi Bandopadhyay said, “I am not aware what the students have done today as I was not present there. However, I can say that the teachers not behaved well with them on Teachers’s day”. However, she did not reply when ask if she supports the students preventing entry to the college.